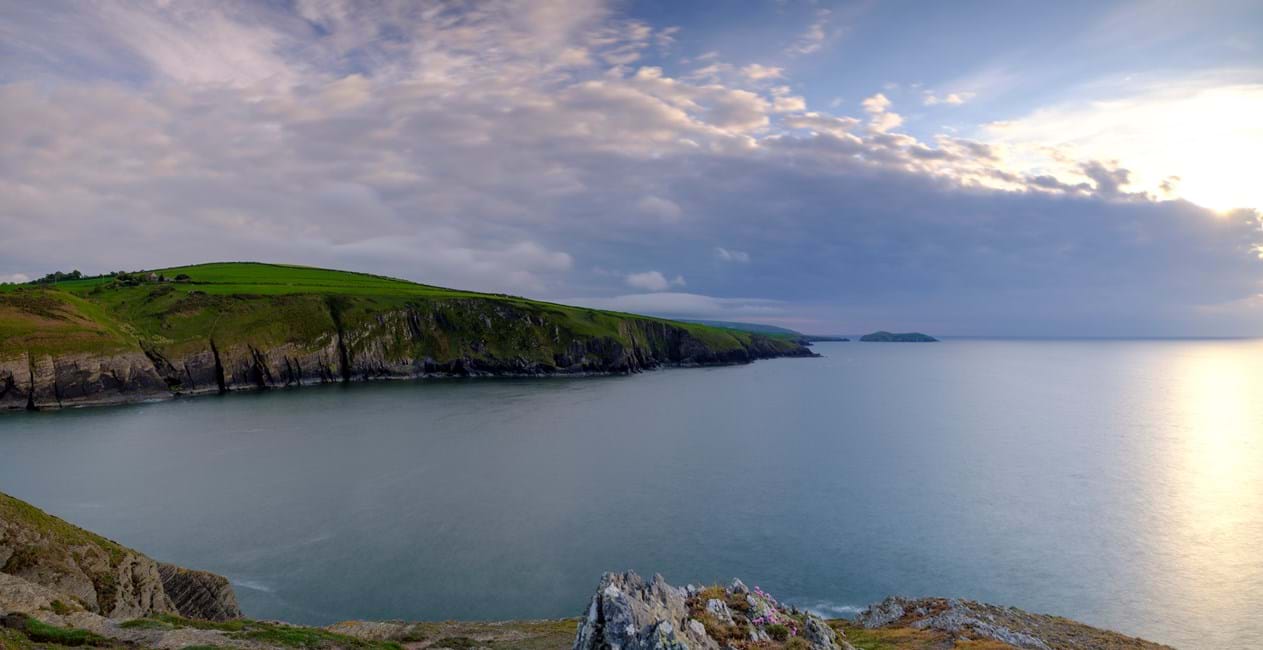 The legend of Taliesin

Many Welsh legends are very strange.

This is the legend of Taliesin. Ceridwen the witch lived with her husband, Tegid Foel, near Bala, Gwynedd (Llyn Tegid is the correct name in Welsh for Bala Lake and was named after him) and they had two children. Creirfyw was the most beautiful girl in the world, but their son, Morfran, was the ugliest boy in the world.

Ceridwen was quite concerned about her son, so she made him a special drink in order to make him wise. She boiled herbs in a magic cauldron for a year and a day and at the end of that time, Morfran was supposed to drink the last three drops. Her servant, Gwion Bach, helped her with the drink. Unfortunately, one day, when he was helping to stir the drink, he swallowed a drop and was endowed with the gift of poetry.

Ceridwen went wild and chased after Gwion Bach. As the drink was magic, Gwion Bach turned into a hare. The magic drink had given him a special ability. The next minute, Ceridwen, the witch, turned herself into a speedy greyhound and ran as fast as she could after him.

Ceridwen was about to catch Gwion when he reached a river. So Gwion turned into a fish and jumped into the water. She turned into an otter to hunt in the river and although Gwion swam faster down the river, Ceridwen was closing in on him.

Suddenly, Gwion jumped out of the river and turned into a bird, but Ceridwen turned herself into a falcon, flying after him like a flash of lightning. Gwion managed to fly away from her but the falcon was a much faster bird and Ceridwen was soon on his tail.

Then Gwion had an idea: why not turn into a seed of corn? So he turned into a seed and fell to earth into the middle of a heap of corn. It was safe, he thought. Ceridwen would never be able to find him. But no - Ceridwen was close once again. She had turned herself into a chicken and was starting to eat the corn. She ate all the corn, including Gwion!

Nine months later, Ceridwen had a baby, Gwion Bach, the seed of corn she had swallowed. Although she was angry with Gwion Bach, she couldn't kill him. He was such a beautiful baby. But Morfran was angry, so Ceridwen wrapped the baby in a leather bag and threw it into the sea at Barmouth.

As he grew up, everyone saw that Taliesin was a very able boy and that he spoke in poetry. He was an amazing boy. 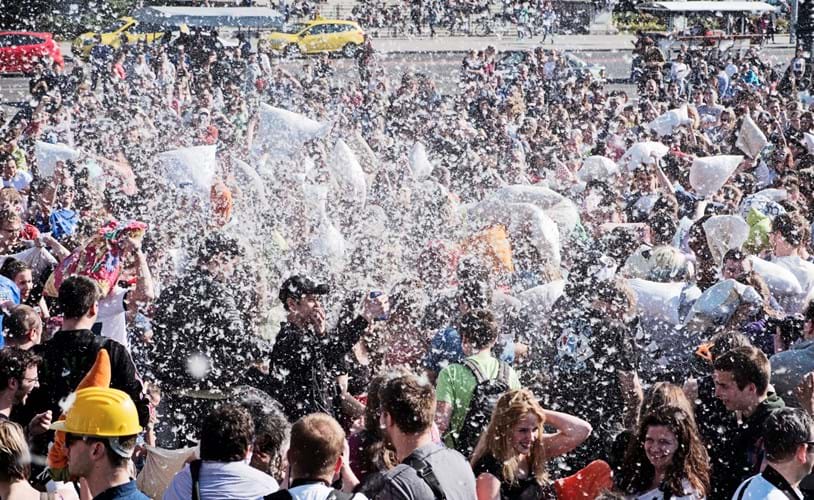 Thousands of people across the world will go to a public place, such as a park or a big yard, and enjoy themselves swinging a pillow. Weird!

Why will thousands of people take a pillow to a public place?

Saturday 4 April 2020 is International Pillow Fight Day.  Thousands of people will be 'fighting' with pillows!

How old are these people?

Anyone of any age can participate - children, young people or adults.

Do you need a special pillow?

No, but it is better to use a soft one.

How do you pillow fight?

It's simple. You have to hold a pillow and swing it gently to try and hit someone else.

Thousands of people will be swinging a pillow at the same time, so you mustn’t be too wild. Also, you mustn’t hurt anyone.

Are you allowed to hit anyone?

No. You're not allowed to hit anyone who doesn't have a pillow.

Do you need to wear special clothing?

No, but it's best to remove your glasses off before starting - just in case.

What happens on the day?

People come to a particular part of the city by some particular time. Then they wait for the sign to begin.

A loud bell or whistle.

Everyone starts hitting each other with a pillow.

How long does it last?

This can last for half an hour or for two hours - it depends on the people. The best thing is to wait until everyone is tired and then stop the event.

Everyone is expected to help clear all the feathers and any other mess, in order to leave the place as clean as it was before starting.

How much does it cost?

Nothing. It is free.

Click and drag the correct fact to the world record event 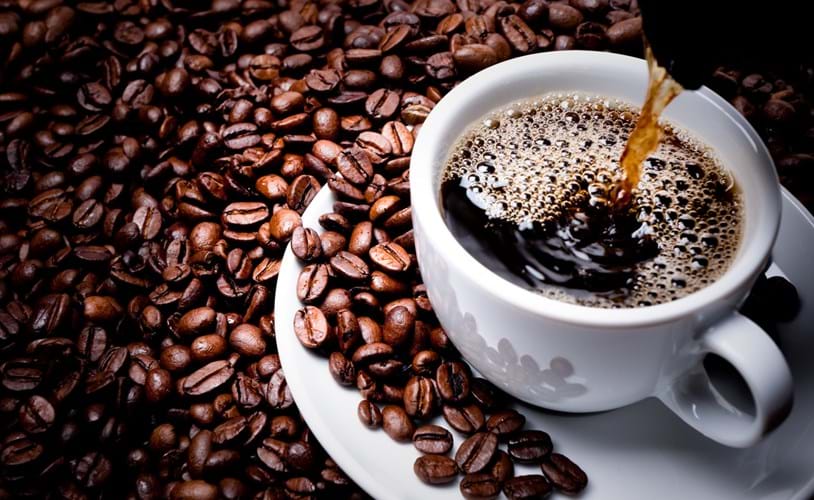 Some people enjoy drinking a cup of coffee at any time of the day and they love a coffee cake too! Others add coffee to gravy or soup, but some people do quite "strange" things with the remnants of the coffee pot. They pour them onto the garden – to keep snails and cats away – or use them with the shampoo when washing their hair to create hair that looks very healthy (but be careful, it can darken the hair!).

Some people even rub coffee beans over their bodies to get rid of old skin.

A London-based company has plans to use coffee for something very different! People from Great Britain drink 95,000,000 coffee cups a day which creates 500,000 tonnes of coffee waste!

Arthur Kay, winner of the title Entrepreneur of the Year 2017, has set up a company called Bio-bean, which collects coffee waste from coffee shops, railway stations, universities, etc., in order to produce fuel.

The company has already created coffee logs to burn in the house to heat homes and they create biofuels that can run various vehicles including red London buses. This would significantly reduce pollution in the city.

This is something for you to think about the next time you drink a lovely cup of coffee!

Tomorrow I'll be going to a small town called Rachel. Strange that Rachel is the name of a town! Rachel is near Highway 375 and only about 100 people live there. They welcome visitors of all kinds including aliens! I’m looking forward to talking to some of the other people visiting the town because I want to ask them about their experiences. No one from Rachel has ever seen an alien or a spaceship! I wonder if events like this have been seen in Wales.

I hope I'll be home soon.

Try a new sport or event. It's a good way to keep fit and meet new friends. Athletics offers a number of varied opportunities to enjoy sport and keep fit and healthy.

Why not consider taking part in athletics? You’ll be more active and have the opportunity to develop through different levels. You can run for fun locally to track and field competitions in a competitive league.

Give it a try! 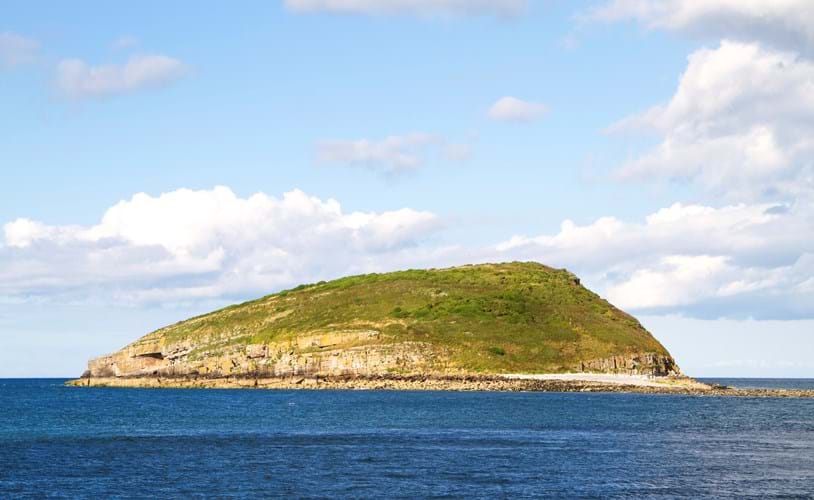 Is there something special about Anglesey?

The children of Rhos-y-bol primary school in Anglesey were having a netball lesson in the yard one day in 1977. One of the girls looked up as she prepared to score and, suddenly, saw something moving across the sky.

Then all the children saw the strange thing flying. They went into the classroom and teacher Mrs Mair Williams asked them to draw what they had seen – without showing each other what kind of picture they were drawing. Everyone then compared their pictures and all the pictures looked very similar to each other. Everyone had seen the same thing and everyone had drawn the same picture!

What was in the picture? A spaceship in the sky. The bottom of the craft was flat and shiny and the upper part was like the shape of an egg.

It is clear that the schoolchildren of Rhos-y-bol saw something strange in the sky that day in 1977. The object was not just seen by one person, but a whole class of children. Not only that, but some people have seen a strange light rising out of the sea near Anglesey, and also falling into it. This has happened several times off Puffin Island. So, is there something 'living' in the sea off the coast of Anglesey?

Do you believe in aliens? Aliens from space or living at sea? What about spaceships? Has there been any talk of spaceships in your area?

Who can forget the amazing Michel Lotito?

During his lifetime, Michel Lotito of Grenoble, France, known as Monsieur Mangetout (Mr Eat All), ate metal and glass throughout his lifetime, beginning in 1959.

Gastroenterologists X-rayed his stomach and described his ability to consume 900g of metal per day as unique.

a pair of skis, 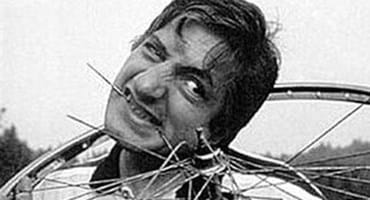 Michel first became aware of his ability to eat unusual items when a glass from which he was drinking, broke and he began chewing the fragments.

He said that bananas and hard-boiled eggs made him sick because they were too soft for his stomach to digest!

A word of advice don't ever do something so strange! It is very, very dangerous! 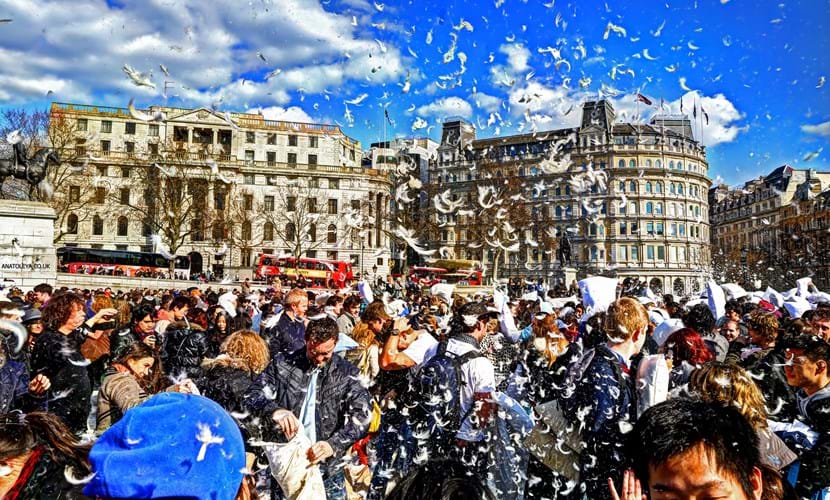 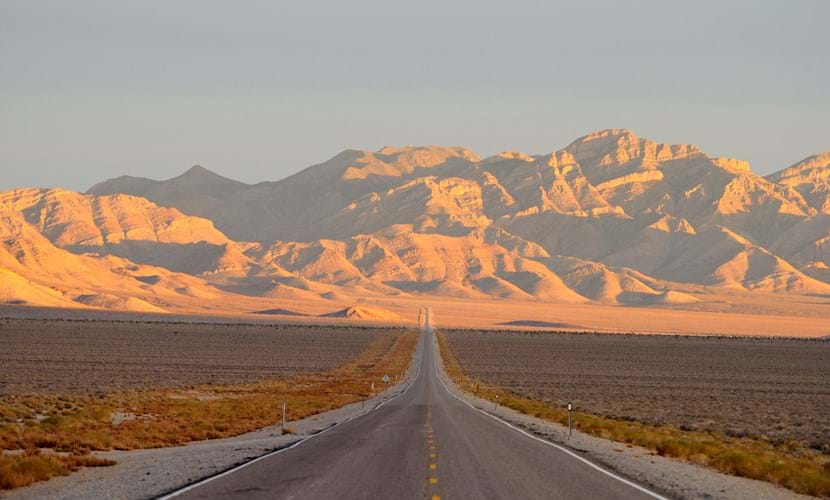 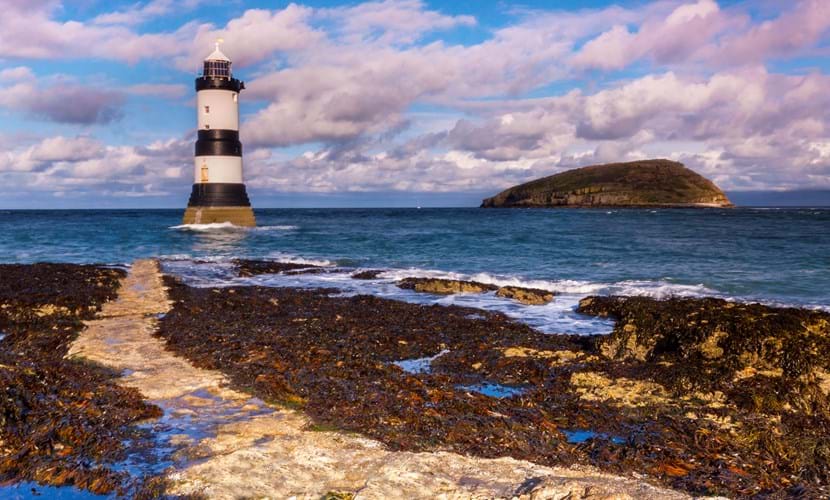 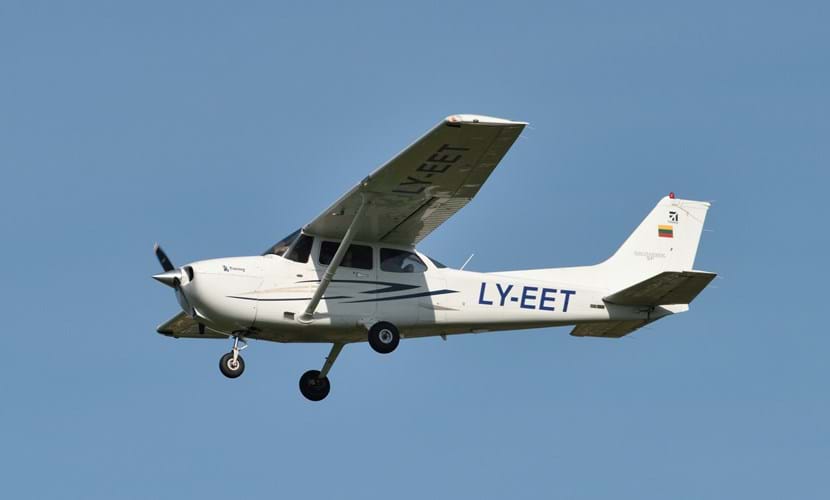 Thank you for your e-mail requesting some information on retro-running. I can understand why some of your friends think running backwards is a crazy idea!

While running backwards sounds like a strange and unnatural thing to do, I can assure you it's very good exercise for the body. In fact, people in China have been walking and running backwards for thousands of years in order to keep fit.

I’m sure that more people in Wales would start to retro-run in public if it wasn’t for the embarrassment it would cause. If they had the courage to do it, it would be more effective than jogging. Experts say retro-running burns three times more calories than running in the normal way.

It's good for your feet because you land on the right part of the foot and this helps the tendons and bones of the foot.

When running backwards, it is the muscles at the bottom of the stomach that do all the work. This helps to keep your body's posture upright.

It causes less stress on the body than running forwards.

So, Sam, don't worry about the idea of running backwards. Although it doesn't seem a natural thing to do, it will become easy for you with a bit of practice. Start by walking backwards and try to accelerate gradually.

I look forward to seeing your name among the Welsh championship winners one day. Go for it!

On the 27th of February 2020, Tan Y Castell Bakery, Merched Y Wawr, Michelle Evans-Fecci a 2019 Bake Off contestant and Teify Forge broke the Guinness World record for the largest Welsh cake ever made in the world!

The record breaking cake weighed 28kg and was over 6ft in diameter!

31kg of ingredients was used and mixed by hand and then rolled out onto a 7ft griddle using several rolling pins!

The Welsh cake was cut up into hundreds of pieces and shared among the people just in time for St David’s day!

The record breaking cake weighed 28kg and was over 6ft in diameter!

31kg of ingredients was used and mixed by hand and then rolled out onto a 7ft griddle using several rolling pins!

The Welsh cake was cut up into hundreds of pieces and shared among the people just in time for St David’s day!