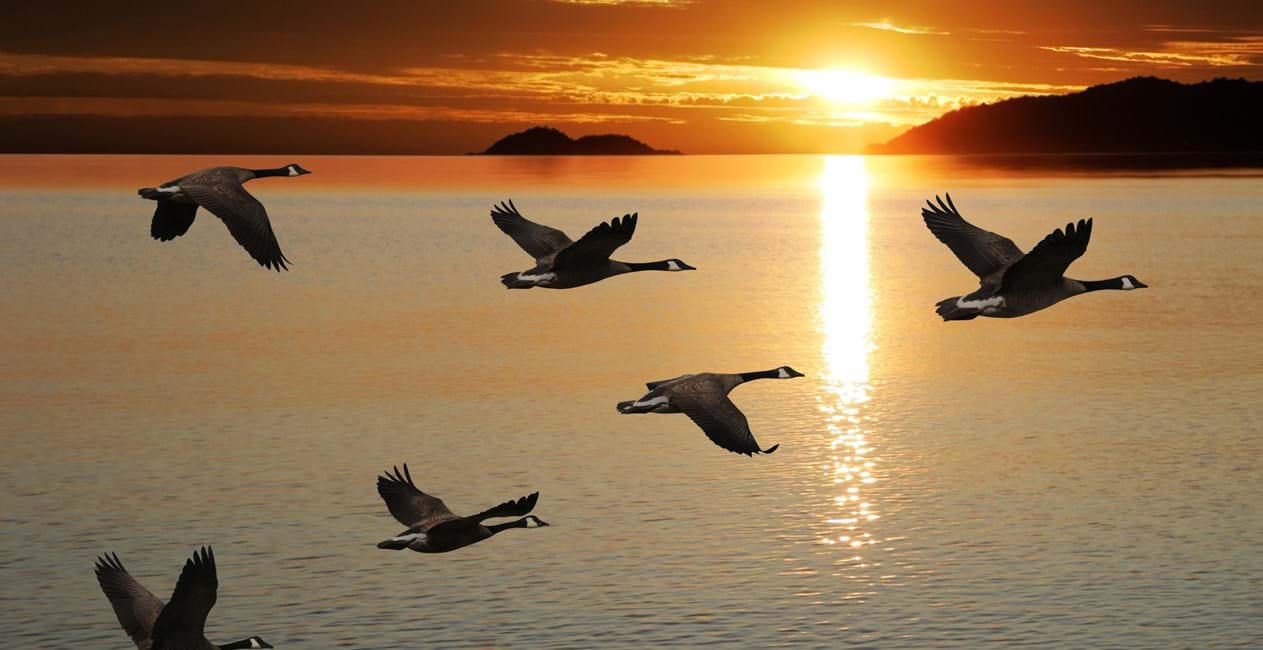 Migration is the movement of either people or animals from one area or habitat to another. Animals display so-called migratory behaviour which is when an individual or a group of animals move from one habitat to a new habitat. One of the driving factors leading to this behaviour is the seasons. The word ‘migration’ can be used for the journey from one place to another or for the act of movement. A flock of birds would move from one country to  a new country because of a change in weather, environment and season. Immigration refers to the migration of humans to another country in order to settle there.

Why do birds migrate?

Why do animals migrate?

Some animals of the savannah migrate throughout the year, searching for food and water. They constantly follow the rains because of seasonal drought. The African elephant moves daily in search of water. They must react to the climate, temperature, and seasonal drought in order to live. Also, predators drive animals such as the zebra to other pastures.

Why do people migrate?

People choose to migrate in search of a better way of life in hope of adequate wages or warm weather. Another reason could be for better health. Some people may be driven or forced to migrate because of social factors, wars and dictatorships. Environmental changes cause concern and drive people to migrate. 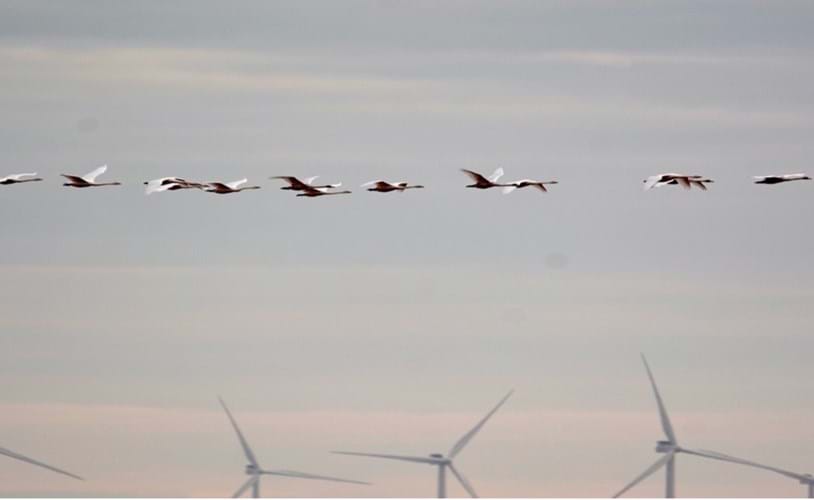 Throughout the year birds migrate to and from Wales. Some species come here in Spring and others in Autumn but some also leave before Summer and others leave before Winter!

We know that swallows are summer visitors here in Wales but they fly back to Africa before winter for the warm weather. As they are entirely reliant on insects for food neither the swallow nor the whinchat would survive a hard, cold winter in Wales. They would starve to death.

The cuckoo arrives in April, Arctic birds in July and the wren in October, along with Europe's smallest bird, the golden-crested wren, which weighs the same as a ten pence piece but, amazingly, can travel across the North Sea to spend winter here.

The early hours or the evening before dark are the best times to study the behaviour and life pattern of birds. You can see flocks of knots and sanderlings on our estuaries and seashores in the Autumn. Keen ornithologists also flock to observe them feeding on insects in the sand with their long, sharp beaks. Many are seen on the Menai Strait and also on the banks of the rivers Taff and Rhymney, so both north and south Wales are part of their habitat for the winter. From afar these winter birds look white but up close you can see a grey back, white belly and shoulders, black beak and legs. They are about 20cm long and can be seen in flocks running quickly along the line of the waves. 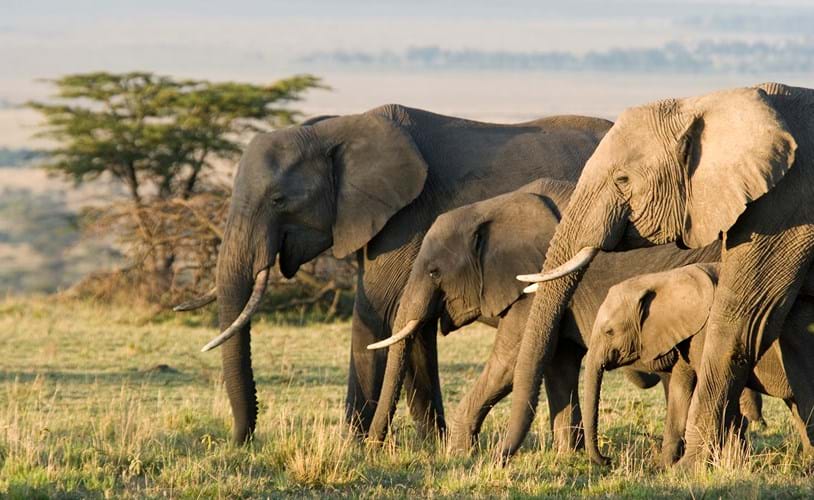 The African elephant is the largest creature on land on Earth. It can grow as much as 4 metres tall and weigh about 6,000Kg. which is as much as ten cows! They can live for about 60 years. The elephant's brain is bigger than that of any other mammal, but it is not as clever as a human! They can store information they learn over the years in their brains, and they are considered quite sensible and wise when old.

The female is able to lead a herd and make decisions when looking for a haven for food and water. The old female is considered wise and is therefore the 'matriarch'. George Wittemeyer studies the life of elephants for the organisation 'Save the Elephants' (https://www.savetheelephants.org/) and has collected very interesting data about their way of moving and migrating around the savanna.

He noticed that it was the matriarch who made decisions for a group of elephants on the prairie. He also noticed that they were able to lift the lid off a water tank to reach in with their truck to quench their thirst. When the herd roams the savannah they split up into smaller groups and so the family separates. But they also recognise each other's sound and can call with a voice like a trumpet and recognise their families through this sound. They can hear for miles with their big ears. The ears also keep them cool in the great heat of the savannah. 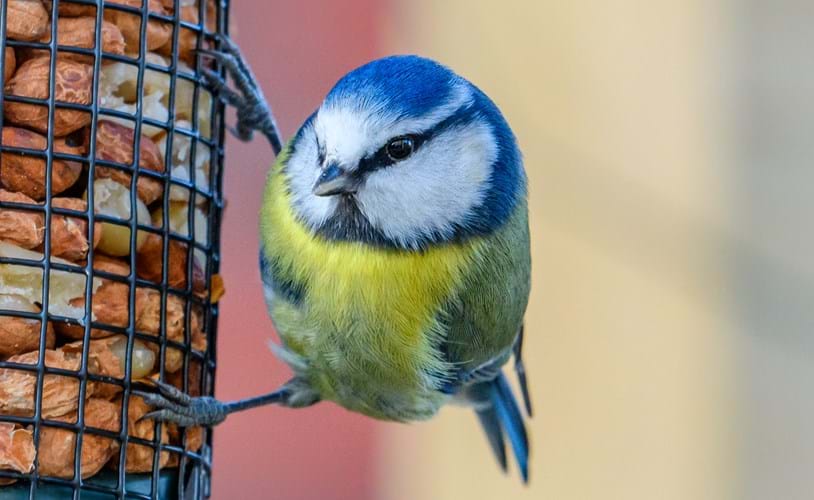 Watching garden birds is one way to enjoy nature and be part of a community that looks after wildlife.

Who knows what you might see when you watch garden birds, and that's what's so special about it. You might enjoy the charming whisper of the goldfinch or a confident flock of sparrows. Or perhaps a robin's lovely song will calm your heart. You can start to get to know your birds by putting food and drink out for them and seeing who comes!  For lots of advice on how to attract garden birds and how to identify them, register with the RSPB's 'Garden Birdwatch' programme.

Find out which birds are the most common and which have become rarer in 2021.

During 2021, 17 million birds were counted as part of the RSPB's national 'Garden Birdwatch’ programme. But what did these findings reveal? Which birds were found everywhere, from our busy cities to our rural communities? Was 2021 the year of the robin, the gardener's friend? Or did the sparrow win first prize again? Meet the most common birds and birds in decline and find out which bird claimed the 'Birdwatch 2021' crown.

Remember to keep the dates between 28th and 30th January 2022 free to support the 'Garden Birdwatch' campaign 2022!

Last day on the ship today. Last night's storm made many of us very sick. It's been a long 10 weeks since we left Liverpool Docks and the stormy autumn weather stops the captain from keeping to schedule.  Everyone around was excited when I woke this morning and saw that there was land in the distance. New York is now within reach. A new life in America for Maggie, Little Jack and myself. I am already homesick for Wales but we mustn’t look back. There is a better life ahead. I hope the little money I have in my pocket will be enough to keep us three until I start work on John Ifans’ farm.

A cold Autumn morning and we were kept waiting on board the cold ship all morning to be registered on Ellis Island. On arrival at the large registration building the three of us had to have a medical in order to be admitted. A long and anxious day. I felt sick – afraid one of us might not be accepted. Good news! Being told we would get a small boat to Manhattan, New York before nightfall. Boat full - all seem to have been admitted.

How are things? I hope you are keeping well back in little old Wales. Well, we've now arrived at our new home in Australia and the weather is quite warm here and everyone is looking forward to warmer weather! We had a tiring journey on the plane and another long journey in the car to get to our new home. The house is amazing! We have a huge swimming pool in the garden and Jac and I have been playing in it every day since we got here. You would like the garden Grandad, we have plenty of room to play ball, climb trees and everything.

I hope that the weather is not too cold over there. I am sure that you are now drawing the curtains early in Wales and enjoying sitting in front of the fire with a cup of tea. I really hope you can come over to see us early in the new year.

These noisy starlings are just getting ready to leave for the day after a night at their roost site under Aberystwyth’s Royal Pier.

Every morning, they fly out together in their thousands, eventually breaking up into smaller daytime foraging groups. It’s thought that starlings depart in flocks for safety, as staying close to one another may lower the risk of predation.

There are few more awe-inspiring wildlife experiences than watching migrating birds pass by, marvelling at the distances they’ve travelled, and how far they still have to go.  (Christian Moullec – ‘The Birdman’)

Christian Moullec has flown with birds.

With his microlight aircraft, he guides migrating flocks of vulnerable species.

Moullec, known as the ‘Birdman’, raises orphaned geese at his home in France.

And leads them on safe migratory routes.

Now, Moullec also takes visitors on short trips to share his moving experience with the birds.

The tourist helps to keep his conservation project running.

Moullec describes his passion for the work:

“The flight inspires in me a huge respect for nature and I can communicate this respect to my passengers.

A third of wild birds have disappeared from Europe during the last 30 years. It’s a disaster.

My beautiful images with flying birds should be used to tell this to the people of Europe.

The most beautiful thing to realise on earth is to fly in the heavens with the angels that are birds.”

A refugee is a person fleeing from something or other

The United Nations (UN) Convention defines it as:

Owing to a well-founded fear of being persecuted for reasons of race, religion, nationality, membership of a particular social group, or political opinion, is outside the country of their nationality, and is unable to or, owing to such fear, is unwilling to avail him/herself of the protection of that country

A person seeking to be identified as a refugee is known as an asylum seeker.

Refugees from Iraq and Afghanistan

Most of those refugees arriving in Europe from Syria, Afghanistan and Iraq have travelled through Greece and the Balkans. While the borders were open, the main pattern of migration was through Greece to Macedonia, north-west through Serbia, Croatia and Slovenia, towards Austria and Germany

Every day we see news reports about the number of boats loaded with people, including women and children, making the perilous journey across the Channel to reach the UK. At least 828 refugees crossed the Channel by small boat in one day over the last weekend of August 2021 – a new record for the current crisis.

Despite Home Office pledges to make the journey "impractical," 30 boats managed to reach the United Kingdom on Saturday 21 August, the department said. The number of people who arrived broke the previous record set less than two weeks before when 592 crossed in a day.

Over 12,400 people have now crossed the Channel into the United Kingdom since the beginning of 2021, according to data collected by the Press Association news service.

A number of people have died while crossing, with governments on both sides of the Channel promising to take action.