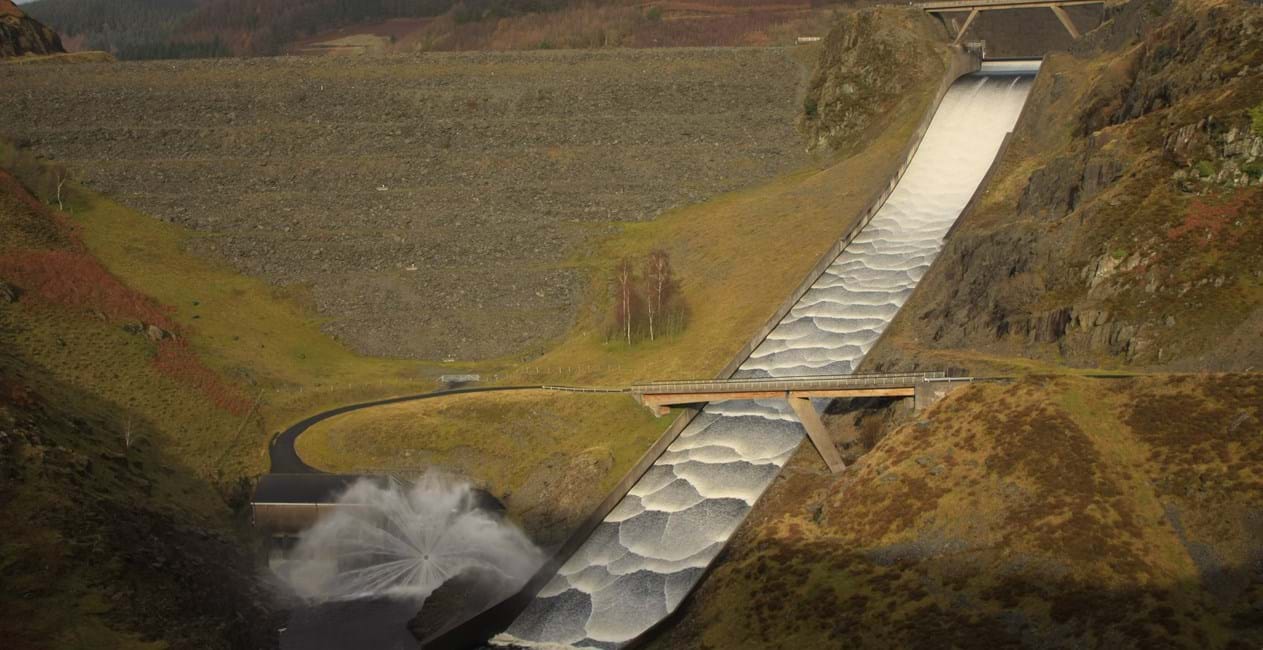 We use on average of 150 litres of water each in the UK every day. Even though Wales has high levels of rainfall we often don't think about how much water we use as there is such a plentiful supply.

Welsh Water supplies 825 million litres of water per day to our nation around a network of pipes of 26,500km in length!

A lot of work goes into producing the water that comes out of the tap. Electrical energy is used to move water around whether it is through the network of pipes to our homes and businesses or around the treatment works itself. By being careful with the water that we use we are not only saving water but we are also saving energy!

Remember there is no new water in the world. We are using the same water that the dinosaurs used! Next time you turn on the tap use as much water as you need but please don’t waste it!

Glossary
Litre
A litre is a metric unit of volume. 1 litre is equal to 1 cubic decimetre. 1 litre is the volume of a cube that is 10 cm x 10cm x 10cm.
Million
Million is a number equal to 1,000 times 1,000.
Cistern
A cistern is a tank for storing water for supplying taps or as part of a flushing toilet.
1
Image & text
Close
Image & text 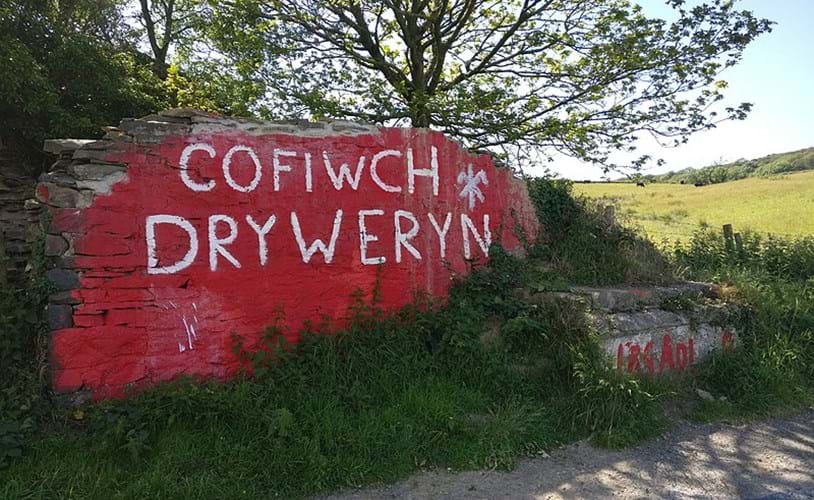 When you HAVE TO leave home

In the 1950s, Liverpool city council was concerned that there would not be enough water available for the people of Liverpool. So they approached the government in London to discuss this and the government decided that the best thing to do was to have a new reservoir in Wales to supply the requirements of the city of Liverpool.

The best way to do this, in their view, was to drown a valley in north Wales - the Trywern Valley, near Bala – even though people were living there!

So, in August 1957, the government decided to drown the Trywern Valley.

THEY HAD TO…  there was no choice.

In 2005, Liverpool Council officially apologised to the residents of the area and to Wales for drowning the Trwyeryn Valley. 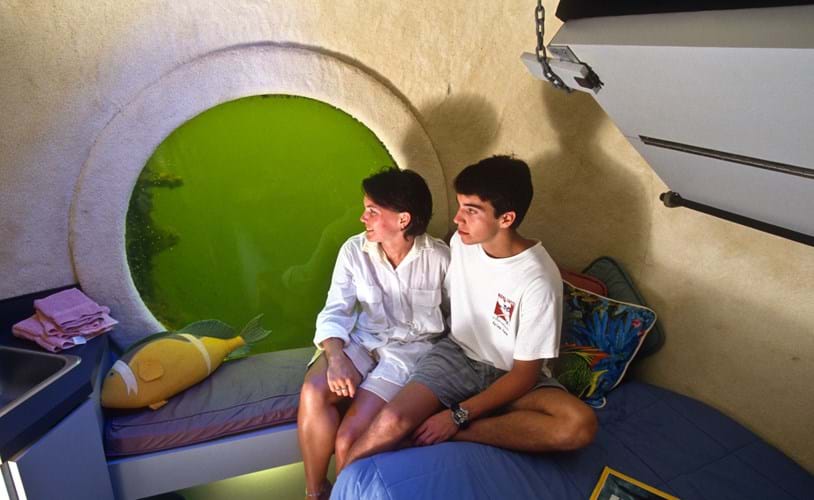 Imagine lying comfortably in bed in the morning... looking out through the window... and seeing thousands of small and large fish of all types and colours swimming outside!

Well, that's the experience you'll get if you go and stay at the hotel under the sea in Key Largo, Florida, USA. Yes, the hotel is under the sea and you have to scuba-dive six and a half metres to reach it!

To reach the lodge, you have to use a special door at the bottom. Then you get to the wet room. This is where you leave the wet suits and have a warm shower before you enter the accommodation itself.

The lodge was an old scientific station, used by scientists to learn about marine life.

It's not a lab now. Today, the accommodation includes three main rooms – a nice big room where you can relax and eat, and two comfortable bedrooms.

The main reason for going to this hotel, of course, is to experience staying under the water and enjoying the incredible scenery outside the large, round windows in each room. And if you want to connect with the big world above, there is a phone.

There will be plenty of tasty food waiting for you in the fridge, as well as a microwave for you to cook. It is also possible to arrange for a "mer-chef" to scuba dive to the hotel to prepare a special tasty meal for you.

So, if you want a relaxing, different holiday, why not?

I hope you’re alright and coping with the online learning. I've had a very interesting week and learned a lot as we discussed ways to save water at home. You'll never believe it but reducing one toilet flush a day saves 6 litres of water. On top of that, by taking a shower instead of a bath you can save 20 litres of water. In fact I prefer to shower anyway. The one that amazed me was not leaving the tap running while brushing your teeth. Can you believe that this saves 10 litres of water! I've encouraged my mum to buy a water butt this week for watering the flowers. She said she was glad to see that I had finally learned something! What have you learned this week?

Hello, can someone help me? I'm looking for interesting facts about water for a school project. I would be grateful for any help with the work. Thank you!

Hiya Rhys, did you know that your brain is 72% water?

Very interesting Ceri. I already knew that. My mother is a doctor! Did you know that 82% of your blood is water!

Here’s an interesting fact for you Rhys. No one will know this fact I’m sure. 1/3 of the water supplied to your home is flushed down the toilet!

Thank you Hari, that is interesting. So it’s important to look after every last drop.

Yes, it is Rhys. I know trees absorb a lot of water every day. A mature tree can absorb 240 litres a day - three baths! Planting trees can help prevent flooding.

Thanks Sioned. It is important that we look after our forests not only in Wales but across the world.

Hello Rhys. Mam works with the water board. She said 97% of the water in the world is seawater. Most of the 3% of the fresh water is trapped in ice caps and therefore less than 1% is available for us to use. That's awesome.

Thank you for your facts. So it’s important that we look after this valuable resource. We probably use around 150 litres of water in our homes every day. How can we reduce that I wonder?

Water truly is amazing. But how much do you know about it? Do you know where it comes from? Or how it gets to your tap? What about how we make water safe to drink? Or the best ways to conserve it?

Dinorwig is comprised of 16km of underground tunnels, deep below Elidir mountain. Its construction required 1 million tonnes of concrete, 200,000 tonnes of cement and 4,500 tonnes of steel.

The station's six powerful generating units stand in Europe's largest man-made cavern. Adjacent to this lies the main inlet valve chamber housing the plant that regulates the flow of water through the turbines. 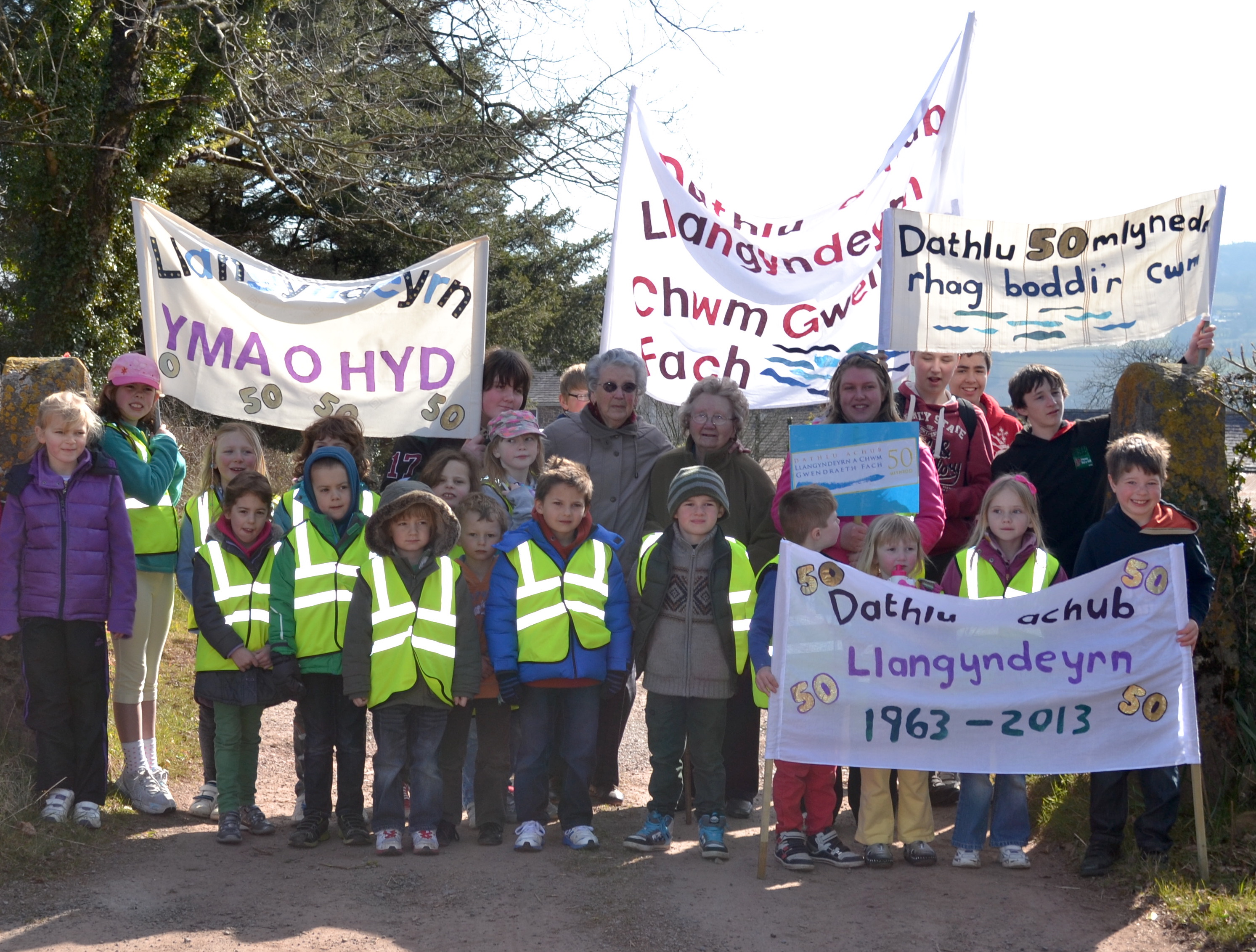 It is a pleasure to write this letter to thank you for your tireless efforts in the 1960s to save the Gwendraeth Fach Valley from the clutches of the Swansea Corporation. My family has been part of this close and friendly community for over half a century.

News of a plan to drown the valley where the homes of my ancestors stood came as an unexpected shock for the residents of the valley. You can’t imagine this area without its farms but with a 60ft high dam on the outskirts of the village of Llangyndeyrn. The work of the Defence Committee that responded doggedly to fight to save the valley is also to be commended. Uniting residents to protest and march was a challenge in itself and your love of your neighbourhood motivated you. Everyone played their part in defending the village from Mr Smith ringing the church bell to warn the villagers, to the farmers and their agricultural machinery that created defences.

After five years of fighting and campaigning, August 1963 brought a time to rejoice that Mr Lillycrap had given up his efforts because of your enthusiasm to save the valley. Fifty years later I still celebrate your success as I look through the kitchen window and marvel at the glory of the Valley around me.

Thank you from the bottom of my heart for fighting in the past to save our present.

Hundreds of people travel from Britain to France every day. Some people fly, some go by car, bus or lorry and some get on their bike.  People have to cross the Channel between Britain and France over water. The water must be crossed by air, boat or ferry.

Today it will be possible to cross the channel through a tunnel. The 'Channel Tunnel' will be officially opened by the Queen and French President Francois Mitterrand at ceremonies in Britain and France.

The Channel separates the South of England and the North of France. It is about 560 km long about 34 km wide between Dover and Calais which is the narrowest stretch. It's much wider in other parts, of course.

Although many people talk about 'the tunnel' under the Channel, there are actually three tunnels: 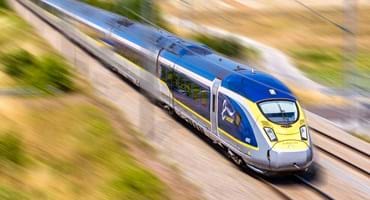 The tunnels are long and deep. They connect Coquelles, near Calais in France, and Folkestone in England, a distance of about 51 km. They run underwater for about 37.7 km.  These are the longest tunnels in the world that go under the sea and are about 50 metres below the seabed. The final cost of the project is £9 billion.

We look forward to travelling to visit our European neighbours and welcome them to our shores. 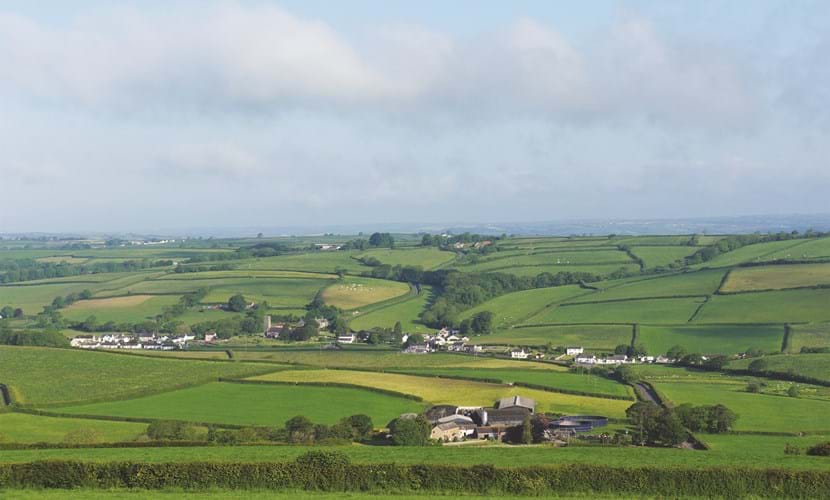 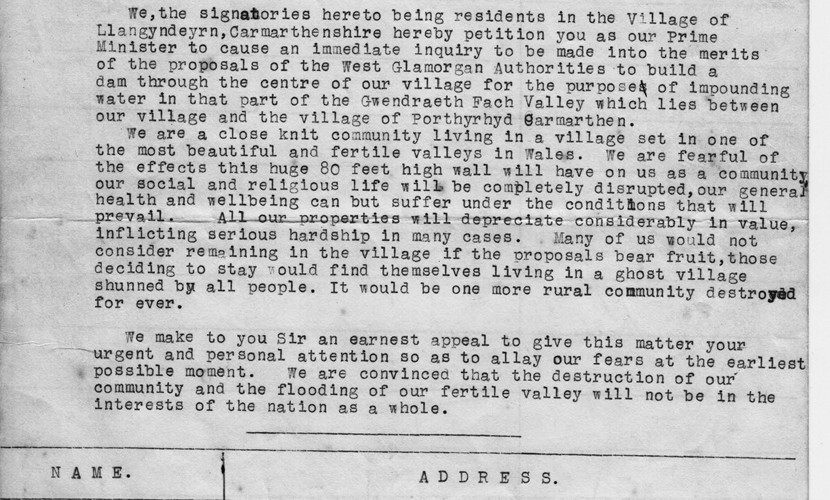 Petition and letter by The Llangyndeyrn and Gwendraeth Fach Defence Committee to Prime Minister, Harold Macmillan. 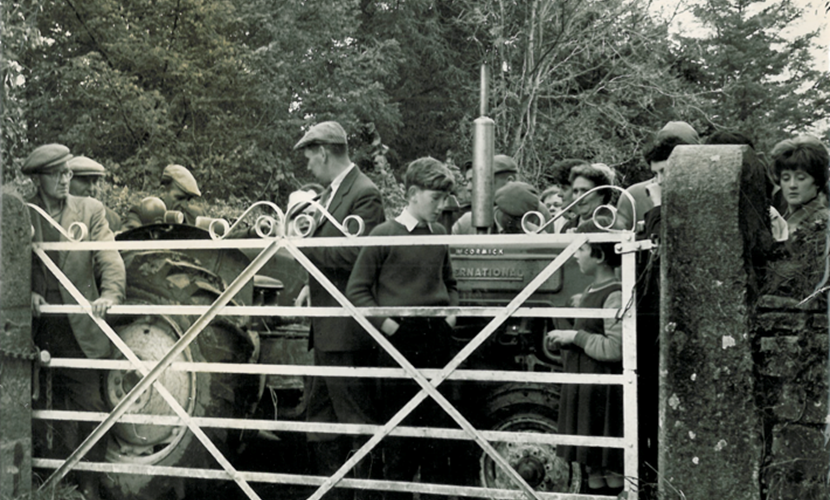 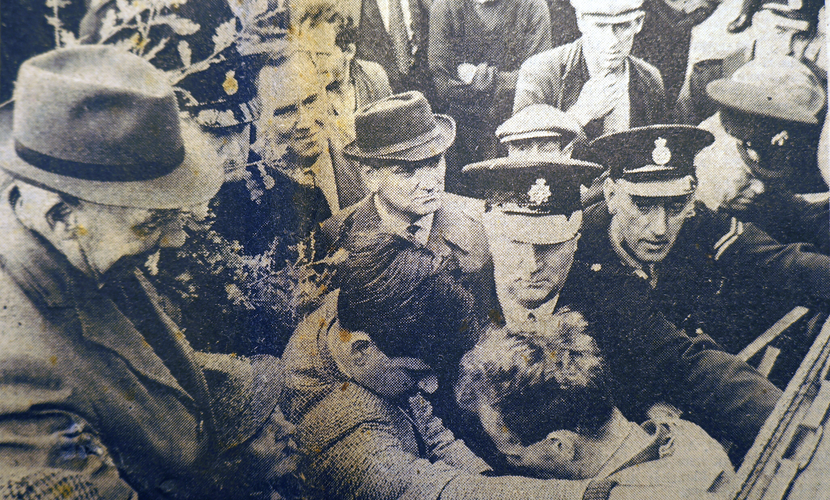 Swansea Cooperation officials attempting to access the land in order to survey land for proposed reservoir. 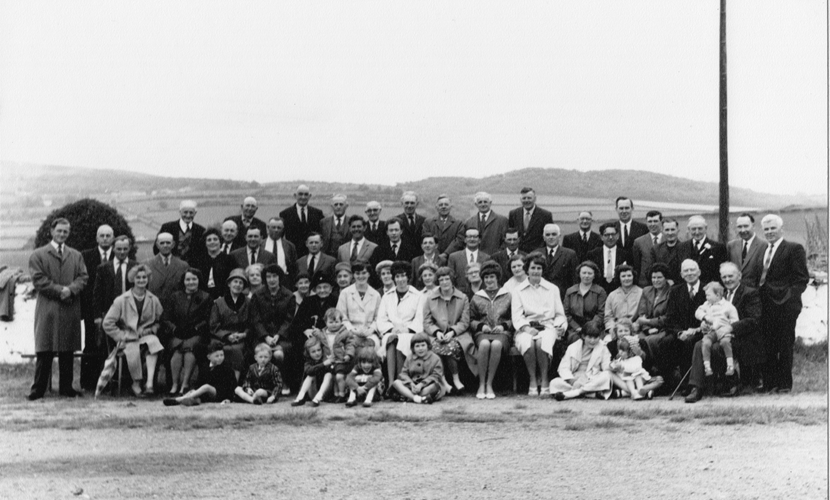 Official photo of the villagers of Llangyndeyrn during the period of the battle to save the village from being drowned. 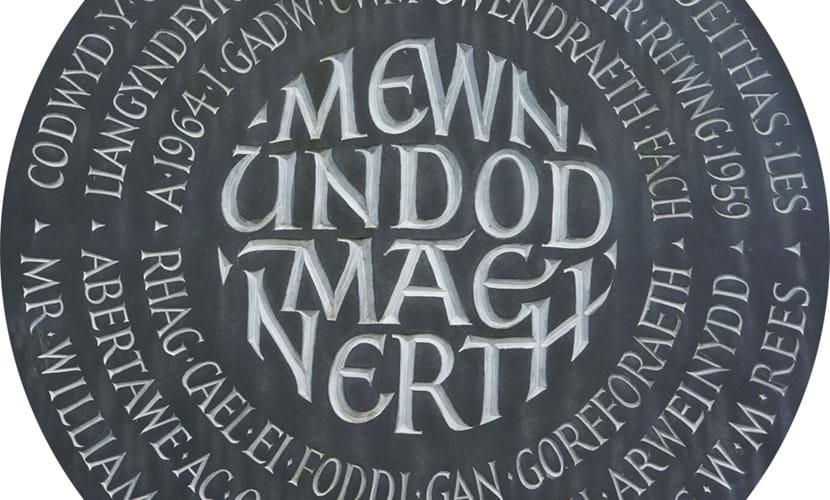 In Unity There is Strength – A memorial stone on the square of the village of Llangyndeyrn to remind the generations of their battle to save the valley.