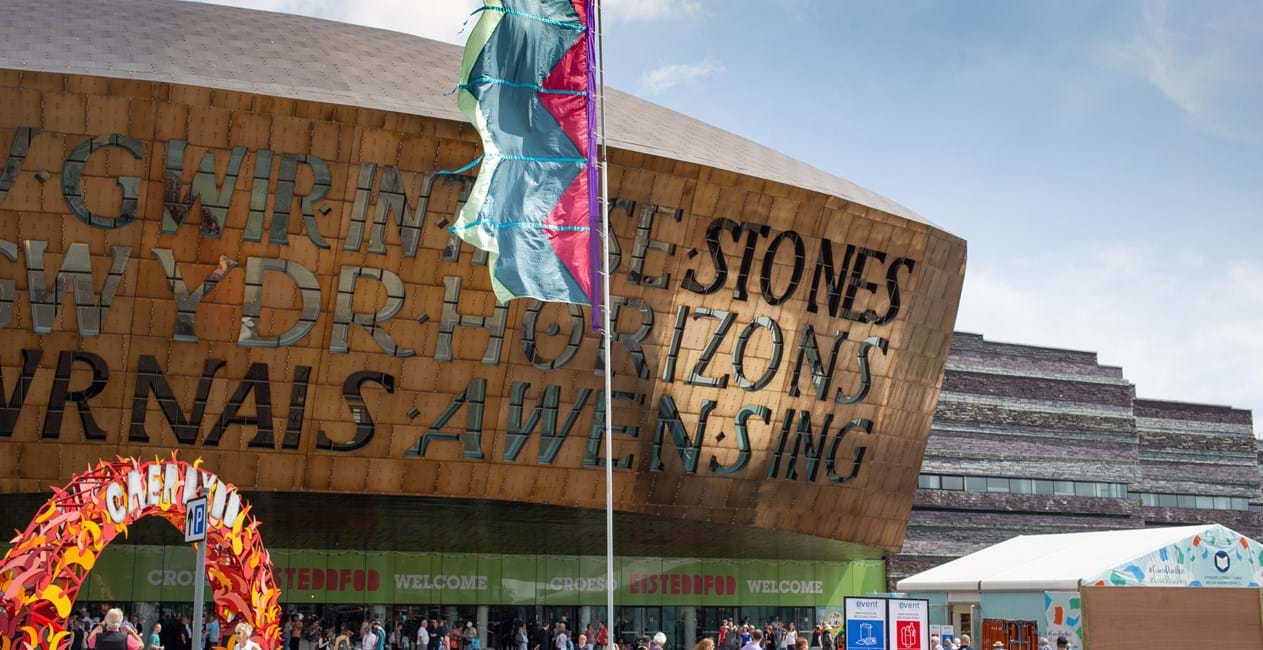 The National Eisteddfod of Wales is held annually in different locations across Wales, alternating between north and south. The Eisteddfod attracts around 150,000 visitors from Wales and abroad to the field which hosts over 250 diverse stalls and attractions. Around 6000 people compete and perform over a week at the Eisteddfod. The National Eisteddfod is thought to be the largest cultural festival in Europe. The Eisteddfod offers a platform at national and international level for music, dance, visual arts, literature, performances and much more.

You may have seen pictures of the Eisteddfod on television and seen people dressed in white, green and blue robes led by a particular individual. If so, you have seen the Gorsedd of Bards and the Archdruid.

The Gorsedd of Bards is an association of poets, writers, musicians, artists and others who have made a contribution to Wales, the Welsh language and its culture. Celebrities such as radio presenter Huw Stephens, singer Caryl Parry Jones, opera singer Bryn Terfel, athlete Tanni Grey-Thompson and chef Bryn Williams have been made members of the Gorsedd.

Have you noticed a circle of stones in towns and villages the length and breadth of Wales? If so, you have seen the Gorsedd Circle. They have been left there to show that the National Eisteddfod has visited that town or area.

The next National Eisteddfod is to be held in Tregaron from 31st July to 7th August 2021. Hopefully you will visit and perhaps compete!

I'm at the Urdd centre in Cardiff.

I caught the bus from school at nine o'clock this morning. We travelled down from Ruthin, through Shrewsbury, through Hereford and then we went to Big Pit on the way. The bus arrived at 12:45. We had sandwiches on the bus before venturing underground. It was incredible! We went down ... down ... down ... underground to see where the miners used to work. Incredible! Follow this link to investigate further:

The Urdd centre is great. It’s in Cardiff – in the city, in the bay, behind the Millennium Centre.

Tonight, we're going ice-skating in the city and tomorrow we're going to see the Principality Stadium and we're going around the Bay. I'm looking forward to it. There is so much to see and do in the capital city.

Read the blog tomorrow if you want to know more!

Here are some links if you want to see where I'm staying:

I'm at the Urdd camp in Glan-llyn near Bala. It’s GREAT!

I caught the bus from school at half past eight this morning. We travelled up from Aberaeron, through Aberystwyth and Machynlleth and stopped in Machynlleth for half an hour. It was nice to have some fresh air before reaching the end of the journey at 11:00.

The camp is incredible! It’s on the shores of Llyn Tegid and we are going canoeing this afternoon. There are lots of things to do here such as climbing, canoeing, kayaking, raft construction, orienteering and more. I'm looking forward to all the activities. One activity that makes me feel a bit scared is walking along a rope course and trying to keep my balance 30-feet up in the air. The leader says it’s totally safe but it will test my nerves to the full!

Here are the links if you want to see where I'm staying:

From Conwy to Newport, from Abergavenny to Mold, and from Pembrokeshire to Llangollen, food festivals have sprung up across Wales in recent years. Festivals are held throughout the year, and particularly over the summer.

Some festivals, such as Pembrokeshire Fish Week and Aberaeron Fish Festival focus on fish, but most are festivals for food and drink of all kinds.

It was established in 1999 by two local farmers who wanted to show that local farms produce great food. In 1999 around three thousand people attended the Festival, and a handful of volunteers ran the stalls. It is now visited by over 30,000 people and there are over 250 stalls every year.

What you can expect at a food festival?

As you can see from the list, people do not only want to experience food, but also do something practical, e.g., making Welshcakes or sausages.

The most important thing is that food festivals are fun. When a food festival comes to town, it's party time – and everyone enjoys a party!

I've decided to learn a new sport and so I've been searching the web for a "different" sport. I've seen a very interesting video of a new game for me. The sport is football in a bubble or 'zorb football' and it's amazing!

To begin with, the teams stand in their own halves of the pitch, facing the ball that is in the centre of the pitch. When the whistle goes, the two teams rush towards each other and then try to knock each other to the floor. Great fun! Then they kick the ball and try to score a goal as in a traditional football match.

But, unlike a traditional game of football, there aren't many rules including no throwing the ball in, no offside and no kicking from the corner. There are probably rules about safety but I'm not really sure what they are at the moment.

A zorb football club is starting at the leisure centre next Friday evening. Do you want to come with me? It's going to be a lot of fun. If you're not sure, have a look at this video. (https://www.youtube.com/watch?v=FVo8FzATac8)

An exciting, adventurous, fun sport. What do you reckon?

Are you feeling hungry? Wales has a great deal to offer when it comes to food and drink. Get an unmistakably Welsh taste of the coast and countryside with a all year-round menu of mouth watering food and drink festivals featuring the best of Welsh produce. Follow the links to find a food festival in your area or further a field. Support local business and produce!

Tafwyl is an annual festival celebrating the Welsh language, arts and culture. Everyone is very welcome to visit the festival, which was established by Menter Iaith Caerdydd in 2006 with the objective of supporting the social use of Welsh in the community. The event includes a range of lively events including music, literature, drama, comedy, art, sport, food and drink for families and people of all ages. Entry to the site is free. In 2019 almost 40,000 attended the Festival at Cardiff Castle. Why not visit in 2021?

Llangrannog was so popular that in 1950 the Urdd decided to set up another centre for older members of the Urdd – Glan-llyn near Bala.

Today, children from across Wales go to Lan-llyn to take advantage of the ideal location on the shores of Llyn Tegid in the mountains of Snowdonia.

The third centre was opened in the capital in 2004 by Bryn Terfel. The centre is part of the Millennium Centre building. As part of the centre experience the Urdd organises visits to all sorts of places including the Principality Stadium, the Senedd, Techniquest, St Fagans, The National Museum, Big Pit, Castell Coch, Cardiff Castle and many more.

A warm welcome and unforgettable experiences await in all three settings. Go for it!