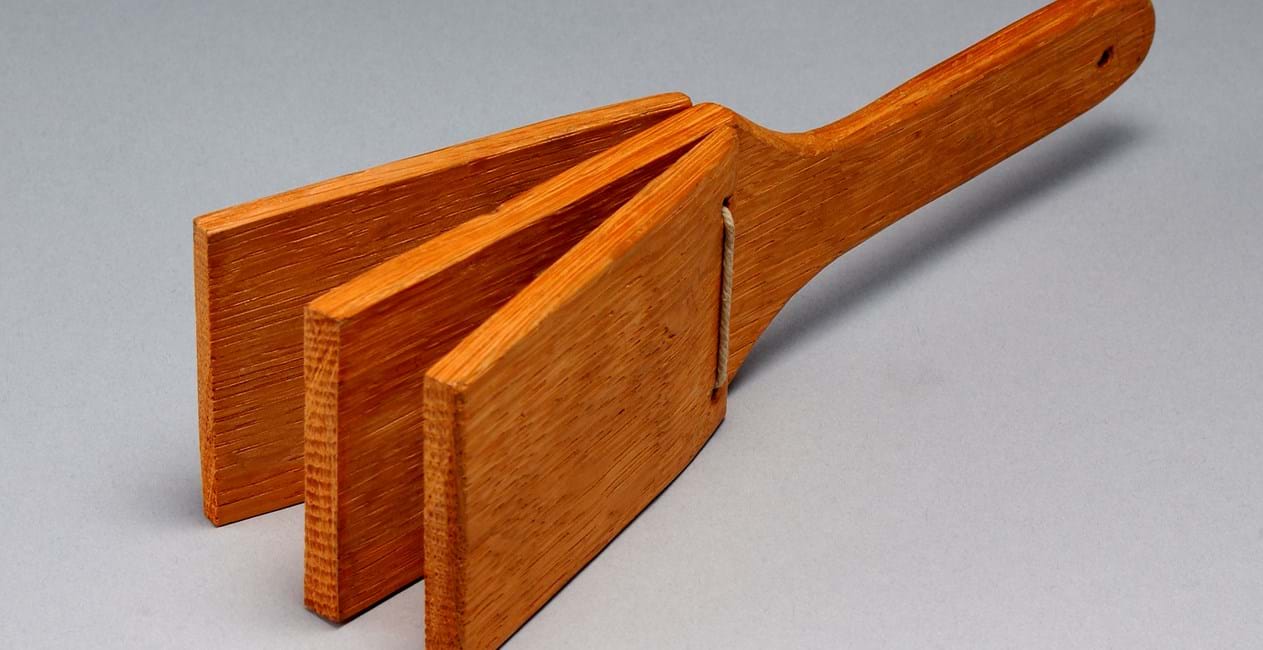 Going egg clapping before Easter was a popular tradition among children in Anglesey many years ago.

According to Elen Parry who was born in Gaerwen in 1895:

We would usually have an hour or two off school, maybe a day or two before the school would close so that we could go clapping before Easter. Your father would have made you what we would call a ”clapper”. And what was that? A piece of wood with two more pieces either side so that it would “clap”, and that’s what a “clapper” was.

The children would travel around local farms or any homestead that kept chickens. They would knock on the door, shake their clappers and recite a short rhyme similar to this one:

And here’s another version of the rhyme from Huw D. Jones, Gaerwen:

The door would be opened and the occupier would ask “And who do you belong to?” After the children had answered, they would each receive an egg. The inhabitants of the home would usually recognise the children and if a brother or sister was missing, they would place an extra egg in the basket for siblings.

Eggs on the Dresser

Having returned home, the children would give their mother the eggs and she would place them on the dresser. The eldest child’s egg would be placed on the top shelf, the second eldest’s egg on the second shelf and so on.

With plenty of energy and determination, an impressive haul of eggs could be had. Joseph Hughes, born in Beaumaris in 1880 and recorded by National Museum Wales in 1959 remembers:

Some would be quite brazen-faced and would have been clapping solidly throughout the week. They would have a hundred and twenty eggs. I remember asking my wife’s brother, “Did you go clapping, Wil?”, “Well, yes”, he said. “How well did you do?”, “Oh, I only got a hundred and fifty”.

Glossary
Dresser
A dresser is a substantial piece of furniture found in many cultures throughout Europe, where they typically take pride of place in the main living room.
Homestead
A homestead is a house and surrounding land owned by a family and often includes a farmhouse and outbuildings.
Tradition
The sharing of customs or beliefs from generation to generation.
1
Image & text
Close
Image & text 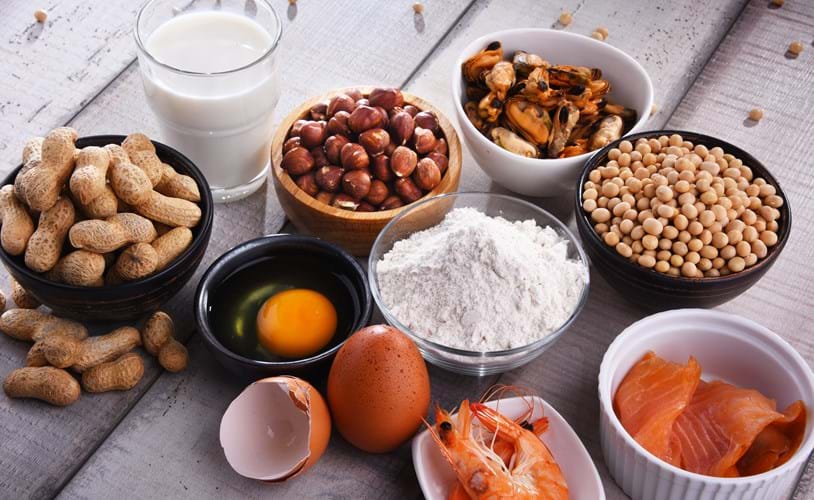 An allergy is when the body reacts badly to something we come into contact with such as food or pollen in plants. Allergies are very common. They are thought to affect one in four people in the United Kingdom at some point in their lives.

Here are some important facts about food allergy:

Which foods cause allergy?

How to manage an allergy

The most effective way to manage an allergy is to avoid the allergen that causes the reaction if possible.

If you have a food allergy, you should check the food’s list of ingredients for allergens before eating it. The Food Standards Agency has information on the labelling of food allergens. 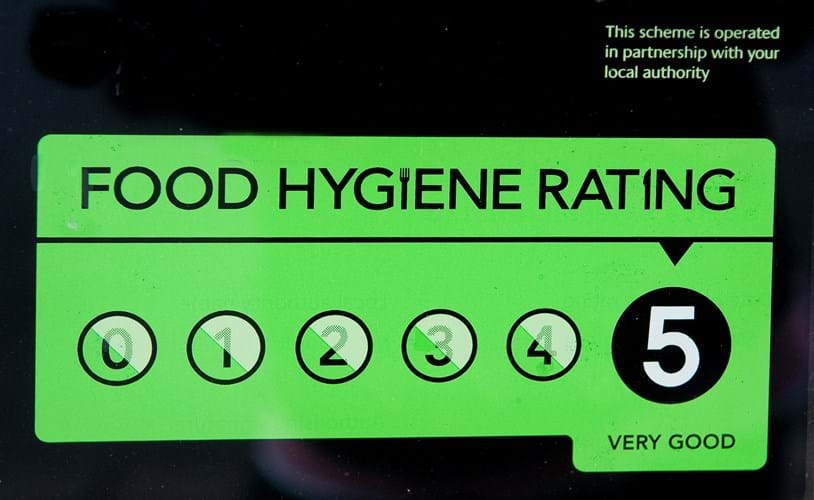 The Food Hygiene Scheme helps you choose where to eat out or buy food. The rating scheme gives you clear information about the hygiene standards of the business. The Scheme is undertaken in partnership with local authorities in Wales, England, Northern Ireland, and guidance in Scotland.

The Scheme gives businesses a score between 5 and 0.

The score is displayed in shop windows or online so you can make choices about where to buy or eat food.

What are the scores based on?

Ratings show how food, hygiene and safety are managed by the business during the inspection. The business is responsible for complying with food hygiene law at all times.

It is law that businesses in Wales have to display their ratings, in a prominent place, such as the business door, entrance or window.

Next time you go to a restaurant or buy food look at the entrance to see the business's hygiene rating. 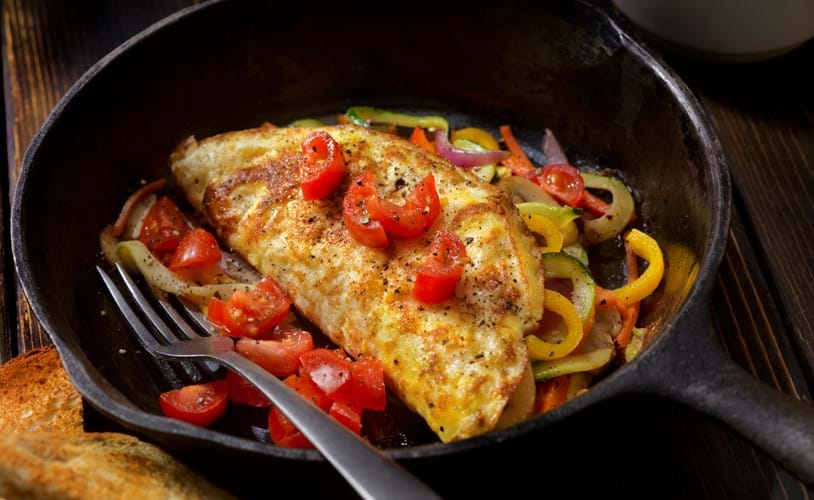 How to cook an omelette

What is an Omelette

Omelette is a light and fluffy pancake made by frying beaten egg in a pan. A popular breakfast with bread or toast in most parts of the world. The omelette is a simple dish that can be made easily.

According to a legend Napoleon Bonaparte and his army were first to taste the omelette. When Napoleon and his army were marching through South of France, they decided to rest at an inn near the town of Bessières. The inn keeper cooked omelette in honour of Napoleon, who loved it so much that he ordered to collect all eggs in the village for preparing the largest omelette for his army the next day. The tradition of cooking annual giant Easter omelette at Bessières, Haute-Garonne began in honour of Napoleon Bonaparte.

The food hygiene rating does not rate the quality of the food.

Words of a Feather

Would you like to go to school to look after chickens? Did you know that a number of schools across Wales keep chickens in the school grounds?

One school in North Wales has developed a farm in the school grounds and started farming chickens and selling eggs on an incredible scale. There are approximately 200 hens on the school farm and they are registered to sell eggs commercially. Ysgol San Siôr in Llandudno sells over 200,000 eggs a year!

By caring for chickens, pupils learn a lot about nature as well as the business and financial element by selling eggs to the community and calculating the costs of maintaining the animals.

Headteacher Mr Ian Keith Jones believes it is important to give pupils live experiences of how to care for the chickens and see them thrive within their natural environment. He says:

'I feel children have a natural curiosity in the world around them,' 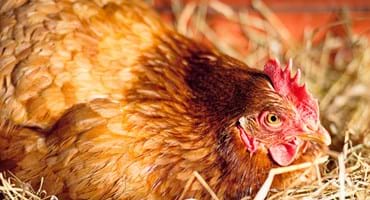 Different classes are responsible for the chickens on a daily basis. They feed them, give them water and gather the eggs during break time. They then pack the eggs for sale.

Her Majesty’s Inspectors said in 2017 that

“the school provides a range of learning experiences that develop independent learners and improve pupils' literacy and numeracy skills.” 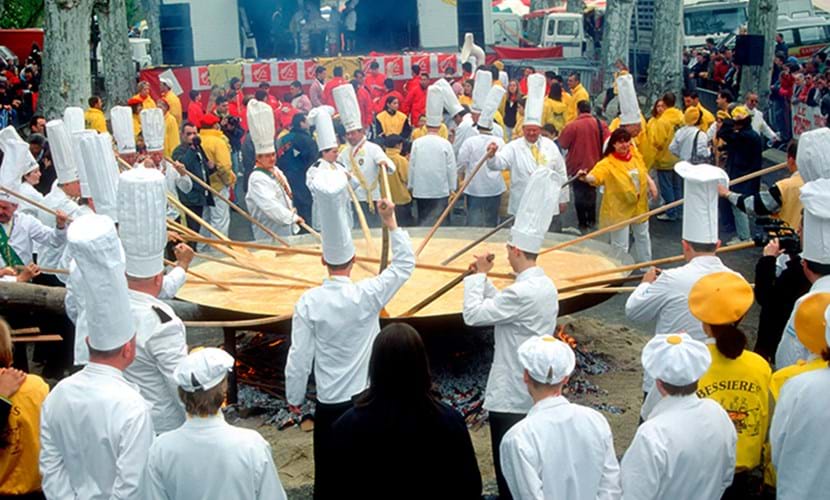 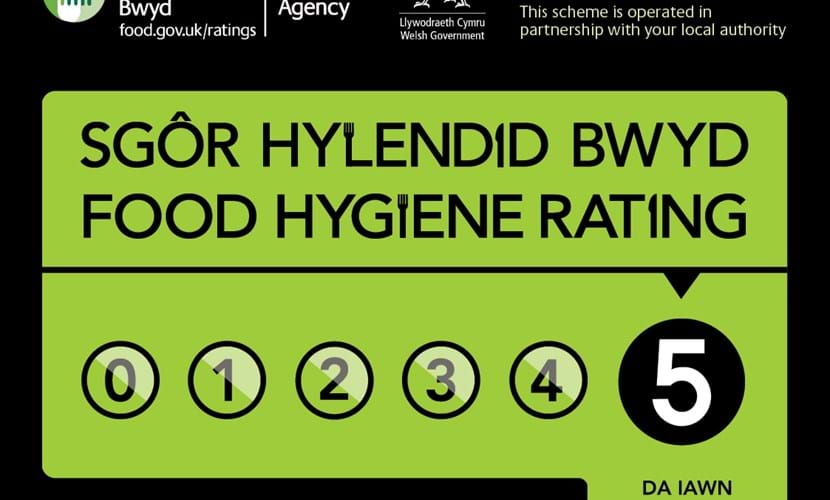 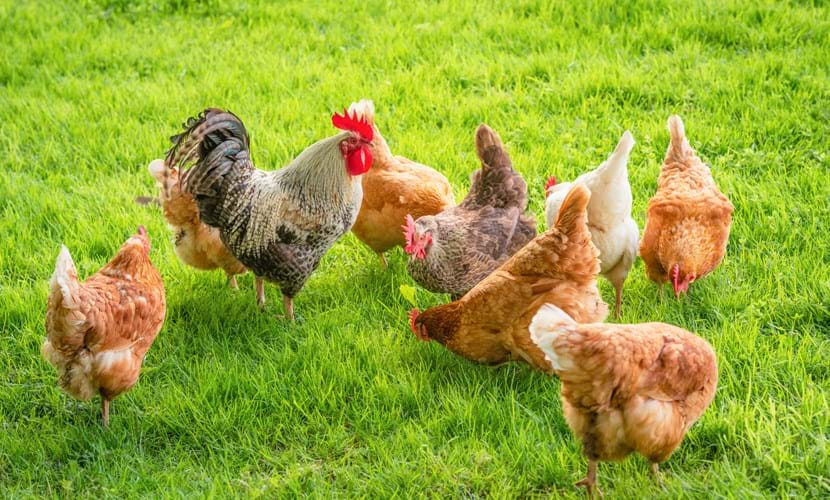 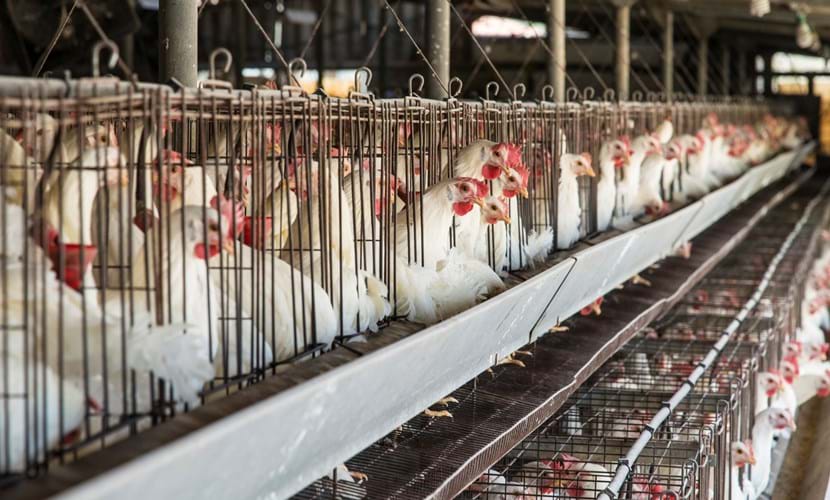 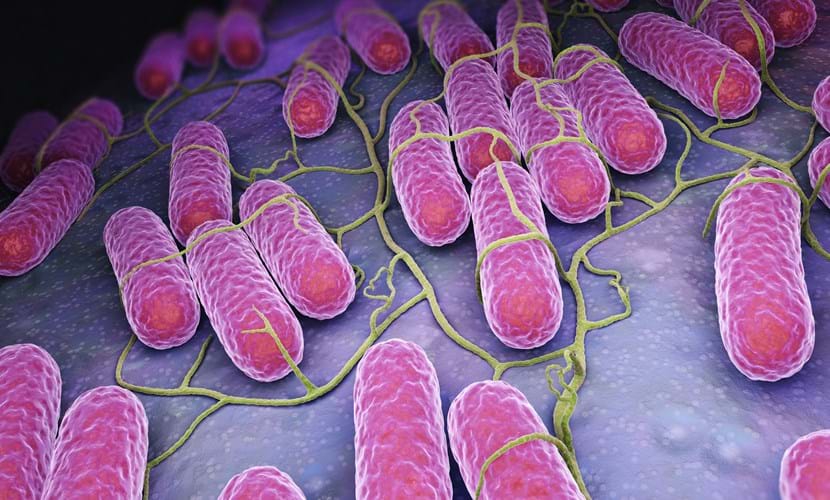 Every year, on Easter Monday, the people of Bessières, about 30 kilometres from Toulouse in France, make a huge omelette.

They use:
15,000 eggs
25 litres of oil
6 kilograms of salt and pepper
Chives
Special chilli peppers

They also prepare loaves of bread 1.5 metres long. After cooking, they cut and divide the omelette between the people. There is also music and dancing in the street, a market and competitions.