The dog has lived alongside people for over 12,000 years and is now one of the two main pets we have and an important part of many families.

Genetic evidence suggests that the dog is evolved from wolves and belongs to the same family as the fox and Jackal. Over 400 breeds of dogs exist. The first dogs were hunters but as farming developed, a long time ago, herding dogs were developed to herd animals such as cattle and sheep.

The dog is also a very protective animal. They were regarded as sacred by the ancient Egyptians, who believed that the dog had godly characteristics and respected them greatly. In fact, only the royal family were allowed to own purebred dogs in ancient Egypt and their servants would get the job of pampering the dogs. When a ruler died, his favourite dog would be buried with him to protect him in the next world. There are pictures of these ancient dogs on the walls of Bronze Age and ancient Egyptian tombs, and on old scrolls throughout Europe.

Because of their loyal, affectionate and protective character towards their owner, dogs are called man's best friend and although some are still used to hunt, herd and protect, their purpose is mostly company and as a pet. Many businesses in Western countries these days offer a dog pampering service. Dogs are very social creatures, they prefer the company of people or other dogs to being alone.

Dogs are also used for other purposes today.

Because of their intelligence, they are trained to support blind and disabled people. Although the dog has the same 5 senses as a person, some of their senses are very sharp and much better than a human’s. A dog’s hearing and sense of smell are exceptional.

Dogs are used to help the police catch criminals and find explosive devices and illegal drugs. We have recently heard of dogs being used as part of the therapy used to heal patients in hospitals and nursing homes and they are also reported to be helping with therapy for learners in schools.

A faithful and very clever animal.

Have you seen a statue of a dog somewhere? There are plenty of statues of people in our towns and cities.

If you go to Beddgelert, you can see a large statue of Llywelyn's faithful dog killed by his master after a misunderstanding. In Edinburgh in Scotland there is a statue of Greyfriars Bobby who was also a loyal dog to his master. You probably know the story of Gelert, but do you know about Bobby?

Greyfriars Bobby was a black terrier. His job was to look after sheep in the company of Jock the shepherd. He would sleep in Jock's cottage and accompany him to the Edinburgh market every week and have lunch at John Traille's café. But one day the shepherd's master took Jock to town and left him there because he was too old to work, but he took Bobby home with him. Bobby didn't want to be without his master. He went off in search of Jock. He wandered the streets searching and found him in a dark corner close to death. Bobby ran to John Traille's café to draw the owner's attention to his master's condition but by morning Jock died. Bobby disappeared for three days before coming back and getting a bone from John Traille. His friend was buried in Greyfriars cemetery and Bobby slept there, on Jock the shepherd's grave, every night for nine years. By day he wandered the streets in search of food and became popular with local children, as a homeless dog.

This was against the law and, when an order was given to remove the stray from the streets, the mayor of Edinburgh came to help. He paid for a license for Bobby and gave him the freedom of the city. He gave him a beautiful collar bearing the words "To Greyfriars Bobby, from the Lord Mayor - 1867, licensed".

The collar can be seen at Huntly House Museum, Edinburgh. There is also a statue of Bobby on the corner of Candlemaker Row. 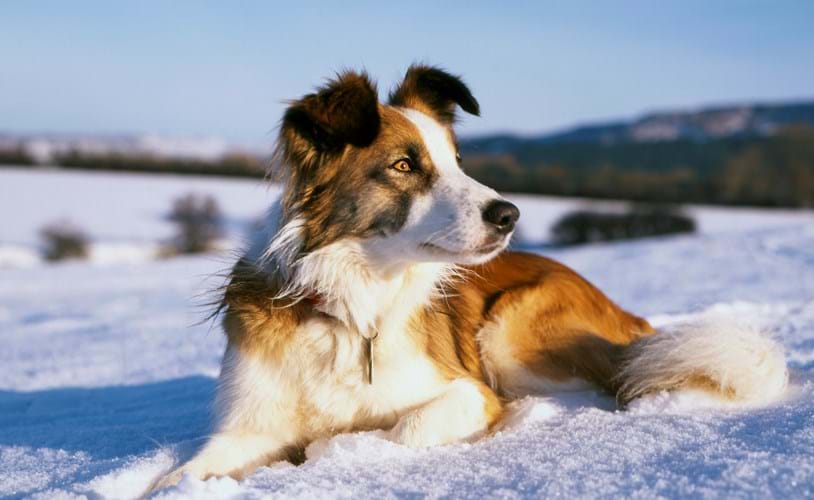 What is the future of the Welsh border collie?

The Welsh sheepdog has been sprinting over the mountains and fields of Wales for over 800 years. They are intelligent and fast dogs and the farmer’s friend when gathering sheep from some of the most remote and mountainous areas of Wales. With numbers falling alarmingly, the Welsh Sheepdog Association was formed some 25 years ago with the intention of restoring and increasing numbers in order to keep the breed alive for the future.

As traditional methods of guiding sheep from one area to another were transformed with the advent of farm lorries and gadgets as well as farmers fencing the boundaries of their land to create fields of various sizes, the use of the Welsh sheepdog declined significantly. New methods of farming resulted in less work for sheepdogs on farms.

The characteristics of Welsh sheepdogs range from blue, red and red bellied and they are stronger than border collie dogs in terms of size. Many believed that the Welsh sheepdog was fiercer than the border collie, which was important in driving cattle and sheep around the country.

During one period, the numbers of Welsh sheepdogs were extremely low and down to around 100 with an estimated 50 young enough to breed.

As a result, we can thank the Welsh Sheepdog Association for ensuring that these Welsh sheepdogs will be seen in Wales for generations to come. 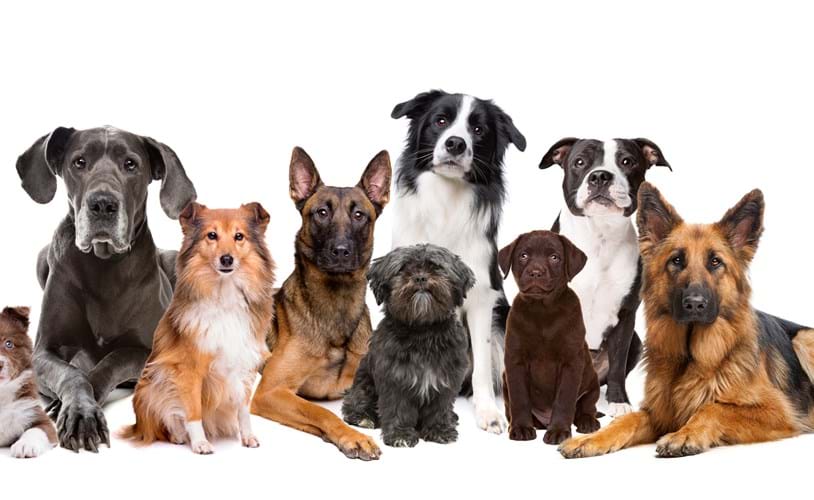 Have you heard of these dogs' feats?

Barry the St. Bernard rescued more than 40 people in the Swiss mountains between 1800 and 1812.

Smoky was a Terrier hunting dog who helped lay radio cables for soldiers in the Philippines during World War II. He later became a Therapy dog who kept soldiers in hospital company and performed tricks.

Lex was a dog belonging to the US army. He worked in the Iraq war, searching for mines.

Dog of the Century

Jack was a very faithful black retriever who lived with his master William Thomas in the town of Swansea.

Every day he would go for a walk along the banks of the river Tawe. He would jump into the river to fetch a stick thrown by William into the water, and he loved swimming back to shore with the stick firmly between his sharp teeth. Since he was a pup he was very loyal and showed concern for people around him. He would run to a person in trouble and bark to get help for them.

The first incident was in June 1931 when he saw a 12-year-old boy drowning in the river. Jack jumped into the deep water, grabbed his clothes and dragged him ashore.

A few weeks later a number of people saw him rescue a swimmer from the docks. He was awarded a silver collar from Swansea town council for his bravery. He was a hero, as he had rescued the swimmer and the 12-year-old boy. Jack was born in 1930 and during his short life he rescued 27 people and two dogs from the river. 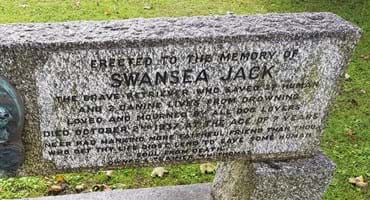 The London Star newspaper awarded him a prize for ‘Bravest dog of the year’. He was presented with a silver cup by the Mayor of London and two bronze medals by the 'Dogs’ Trust' charity.

The much-loved dog became unlucky at the age of 7 when he ate rat poison and died on 2 October 1937.  It was decided to erect a small memorial to honour him in the following year (1938). The memorial made of bronze and granite can be found near the rugby fields close to Swansea promenade.

The name "Swansea Jack" is now commonly heard. It means a person who comes from Swansea. 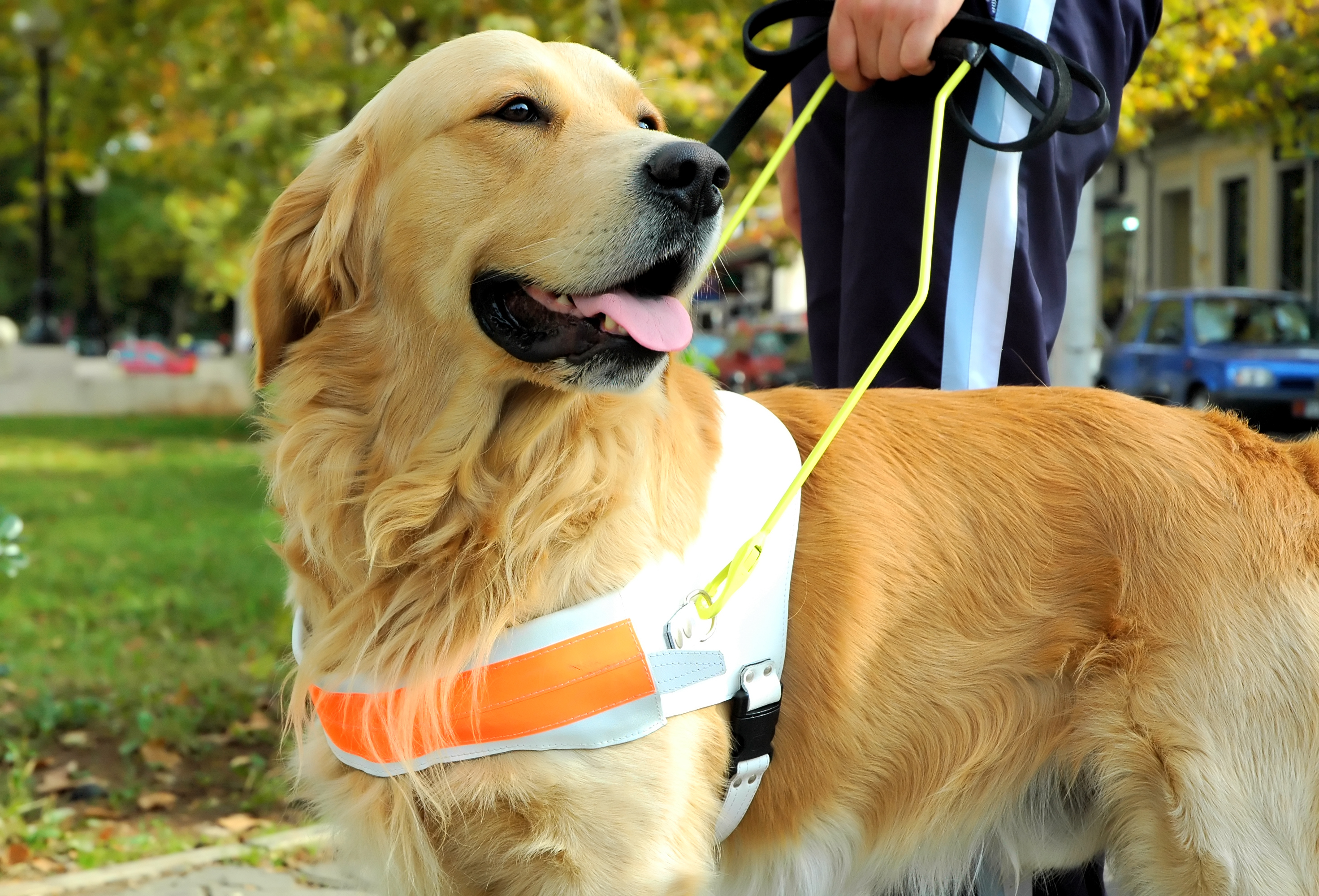 We would like to thank you very much for coming to school last week with Celt your guide dog and for talking to us about how Celt helps you every day.

Celt is a very special dog and we enjoyed your company here at Ysgol Craig Lwyd. We hope you were not tired after all the questions we had to ask you after you talked about how Celt has changed your life and how important he is to you.

We looked for additional information on the web in the afternoon and we have completed a project about Celt and guide dogs to present to our parents next month.

We plan to present the project at a social evening and will be raising money for a charity that supports the work of the guide dogs with blind people during the meeting.

We would like you and Celt, of course, to be able to come to the evening. Having Celt there will make the evening much better for us and our parents. It is being held on Tuesday September 29 at 7.30 p.m. We hope that you are free.

Since 1891, Crufts international dog show has been held in England annually. It is now regarded as the world's most popular dog show. The show is organised by the British Kennel Club to promote dog care and showcase the achievements of the different breeds in existence. In 2022 the show will be held over a 4-day period in March.

Hundreds of people will flock to the show, especially dog owners who compete to win cups and big cash prizes! In the first show, in 1891, there were almost 2000 competitors. Over 30,000 now take part and over 160,000 visitors come to see the show.

But before reaching Crufts, the competitors have to have won in their special categories (a type of preliminary round) just like the Urdd Eisteddfod! They have to have competed in a number of other shows before arriving at the big Crufts show. 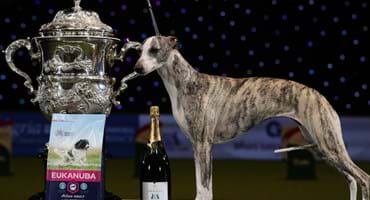 The main competition marks the world's best dog of the year, and brings great credit to the owner of the "Best in Show". The winners of these 7 categories compete in the final: 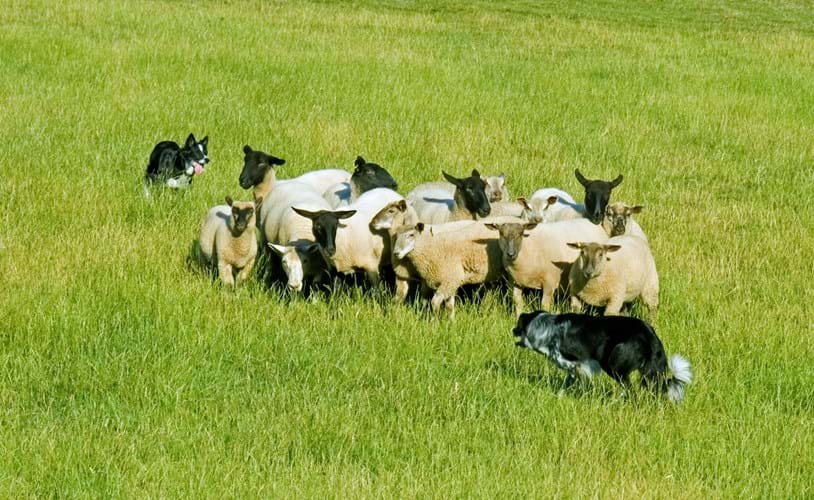 This is one of the most popular poems in Welsh – many children have learned it in school, and it is many people’s favourite, who know it off by heart. This englyn is descriptive and well-crafted. A feature of a good englyn is that it is subtle, draws a picture in the mind and is memorable. This short poem about a sheepdog is certainly memorable. Thomas Richards was the great grandfather of the famous singer from Ruthin, Rhys Meirion.

Rules for composing an englyn!

How to go about writing an englyn:

If the idea is good enough, keep trying and keep improving it.