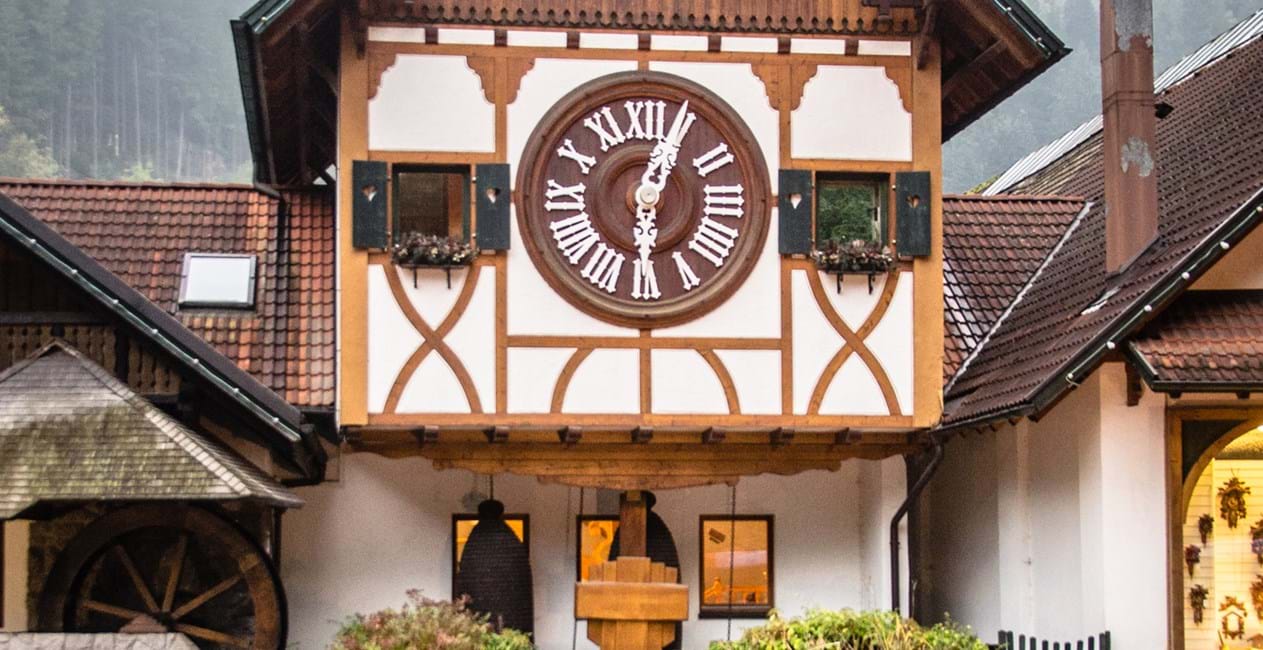 Do you know someone with a cuckoo clock? A cuckoo clock doesn't strike like an ordinary clock. The sound is a cuckoo calling and the bird itself comes out at the same time.

Making a cuckoo clock is not new. The idea goes back more than two thousand years. But the 'modern' cuckoo clock comes from the Black Forest area in southern Germany. People started making cuckoo clocks there around 1740. Flowers were painted on the earliest dials. They then started carving leaves and wooden animals on them, such as this one on the right.

Some clocks play a song after the cuckoo calls. Sometimes, other things move, like a man felling trees or an animal jumping.

The old and the new

'Old-fashioned' clocks have to be wound either every day or every week. Modern clocks are driven by a quartz battery. There is a light sensor in some clocks, so the cuckoo doesn't call at night, thank goodness! Hand-made cuckoo clocks are usually quite expensive.

The biggest cuckoo clock in the world

Big cuckoo clocks have been built in several villages in the Black Forest, to attract tourists. The biggest cuckoo clock in the world is said to be in Triberg. People go there to take pictures of the clock. 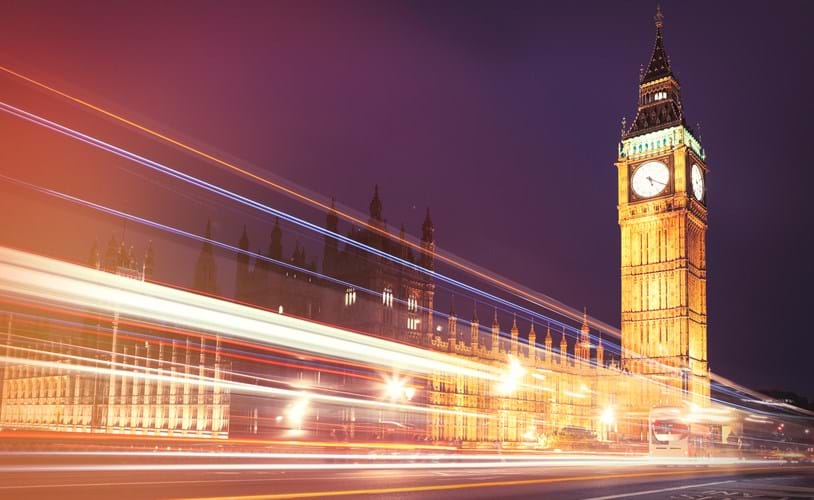 Everyone knows that Big Ben is in London, so what is the connection with Wales?

Well, the connection is Benjamin Hall (1802-1867). In the 19th century, he was MP for Monmouthshire and then for Marylebone. He was a civil engineer, so he knew how to build buildings and bridges safely. Benjamin Hall was the supervisor during the reconstruction of Parliament in London. He was responsible for making sure that the big 13.8 tonne bell was properly installed in the tower.

The bell is called 'Big Ben' and some people say it was named after Benjamin Hall. Perhaps because his name is on the bell, or perhaps because he was a big, tall man - or both!

Does the tower of Big Ben lean?

Yes, apparently! The Clock Tower at the Palace of Westminster where the Big Ben bell is located is about 1/250 out from vertical.

During the 20th century, a five-storey car park was built under Parliament in London, together with the Jubilee Line of the underground train system. But there's no need to worry. Experts say the lean is not something new. They say the tower of Big Ben shifted shortly after being built, and work on the car park and train line has not had an impact. They keep an eye on it, so it will never be like the Tower of Pisa - hopefully!

Benjamin Hall married Augusta Waddington, of Llanover Hall in Monmouthshire and they became Lord and Lady Llanover. She was also known as 'Gwenynen Gwent’ (‘the Bee of Gwent’).

Lady Llanover did not speak Welsh, but was very interested in traditional Welsh music, dancing and costumes.

In the 19th century, Lady Llanover did a great deal of work to develop the Welsh costume. Welsh women had started to forget about the costume, and she tried to encourage them to wear her version of it. This is the costume shown on postcards and gifts from Wales, and the one on sale around St David's Day. 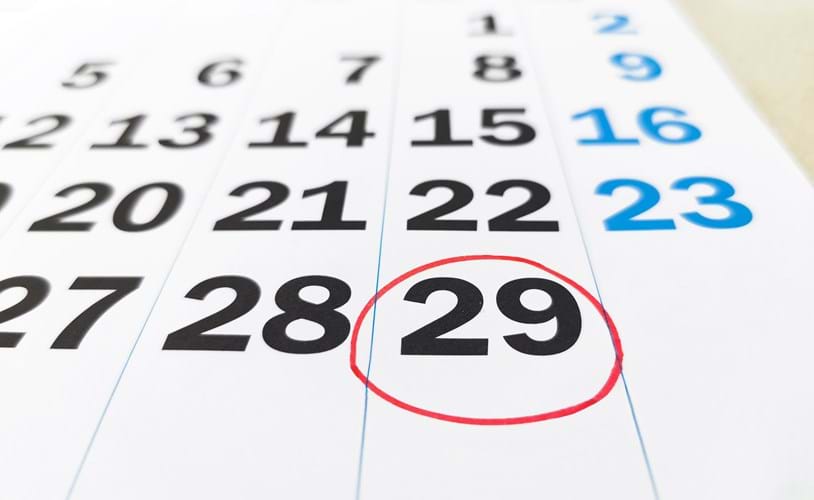 Why do we need a leap year?

The Earth takes 365 days, 6 hours to orbit the sun. Without the extra day every four years, we would lose a quarter of a day each year. Therefore, the leap year corrects the calendar.

What if you have your birthday in a leap year?

The Olympic Games and leap year

The Olympics usually take place in a leap year. This year's games were to be held in Tokyo but due to the Covid-19 pandemic they have been postponed until August 2021.

How do we work out which year is a leap year? 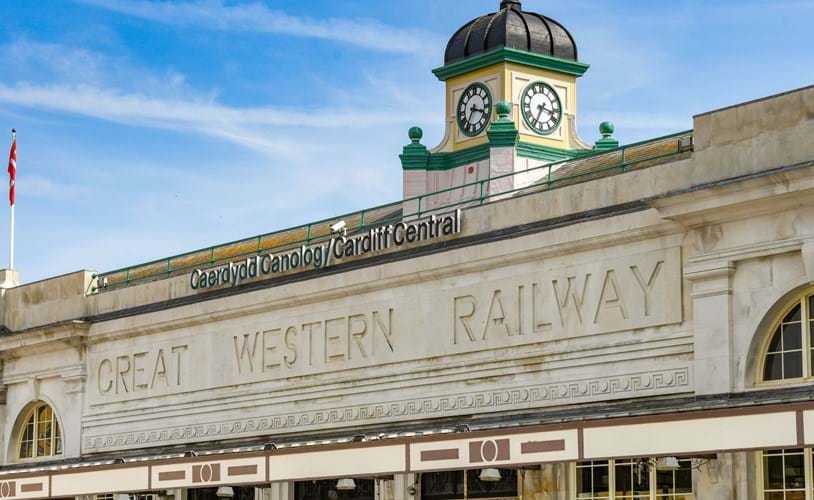 Today, we don't think of Wales as a country famous for clocks, but there used to be a thriving clock-making industry here...

The poet Dafydd ap Gwilym (c.1320-70) wrote about being woken by a noisy wall clock in a poem written over 600 years ago. His poem refers to the wheels, cords, and weights of the clock making the clock’s hammer ring the bell, and is one of the first descriptions of a clock in Britain.

Clocks were to be found in Welsh churches and cathedrals, e.g.

The following are some of Wales’ early town clocks:

There is no mention of clocks in homes before the 1600s. By about 1700, more people had clocks and they were being left in wills.

The number of clockmakers also grew. In 1700, there were clockmakers in eight areas of Wales; by 1750 there were 72 makers and in 1800 the number had risen to 200. So by then, there was someone making clocks in pretty much every town.

The early clocks had a brass face, and a case made of oak. The clock usually needed to be wound every 30 hours (they were ' one day one night cocks'), but the aristocracy had more expensive clocks that could go for 8 days or even a month.

By 1850, not many clocks were being made in Wales. Welsh manufacturers would buy clocks from Birmingham or Lancashire and paint their own name and town on the dial. Once factories started making clocks, the tradition ended. 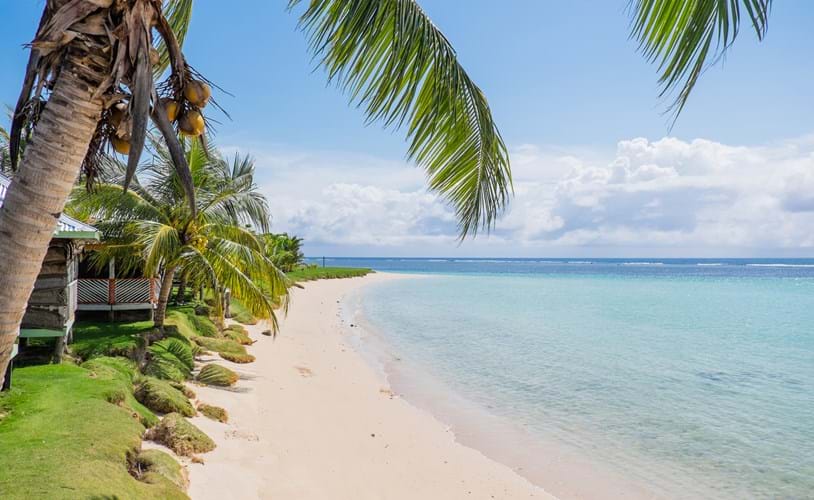 At the end of 2011, Samoa lost a day, 30 December 2011. They jumped straight from 29 December to 31 December. So you were very unlucky if you lived on the islands and celebrated your birthday on 30 December.

Samoa is halfway between New Zealand and Hawaii. In May 2011, they decided to cross the International Date Line so that they would be on the same day as Australia and New Zealand.

For 119 years, they had been the same day as the United States of America (USA). But they trade more with Australia and New Zealand. The Dateline made things difficult for them:

So they were only able to contact other people in offices on Tuesdays, Wednesdays and Thursdays. Also, many people from Samoa have gone to live in New Zealand, so it was difficult for families to arrange to meet each other.

The Dateline runs from north to south along the 180-degree line of longitude in the Pacific Ocean. It's an imaginary line – that is, it's not really there.

It's not entirely straight either. Sometimes it veers to the left or right so as not to cross land and also so that a group of islands are together in the same day.

I wonder if someone can help. It’s October and the clocks need to be turned back an hour. Why?

We turn the clock back an hour so that it's lighter in the morning and gets dark quicker.

Why do we need to change the time? What are the benefits?

This is a great advantage for Scotland, because they are closer to the north pole, and the days are short in winter.

Yes, it's interesting. Other people want us to turn the clocks forward an hour all year round so that we have the same time as most European countries.

Oh, I get it. So am I right to say that if we were the same time as most European countries it would be darker in the morning but there would be more hours of light in the evening?

Yeah you're right. There would be more hours of light after people came home from work. We would spend more time awake during the hours of light. So, there might be less carbon emissions because we wouldn't heat and light our homes as much.

Correct! It can be argued that there would be fewer accidents on the roads as well. Accidents happen as night falls because people are tired. Lots of children are knocked down walking home from school in the dark.

Interesting. But moving the clock forward all year round is a disadvantage for Scotland. Dawn wouldn't break until 10 a.m. Children would go to school in the dark and farmers would work for hours in the morning before it got light. Now I understand why the hour needs to be changed twice a year! Fair play for all!

The National Slate Museum is in the shadow of Elidir mountain, site of the vast Dinorwig quarry. The quarry clock played a pivotal role in many ways. Follow the link to find out more about the importance of the quarry clock.

When do clocks go back in other countries?

In the UK on the 25th of October 2020 clocks go back in the early hours of Sunday morning. But the UK isn't the only country to move the hour.

Turning the clocks back every October makes the evenings much shorter during the winter months. In March of each year we move the clocks forward which means that in the summer we are able to enjoy an extra hour of sunlight.

On Sunday October 25 when the time reaches 2am, the UK will return to 1am.

Many smart devices such as phones, TVs and tablets automatically reset. Analogue clocks, watches and other devices will need winding back. 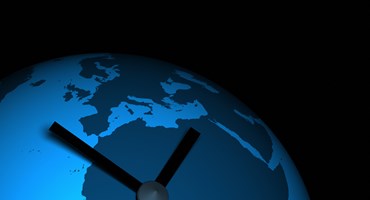 Do other countries change the time?

It’s not just the UK that puts their clocks back every autumn. All European countries, except Belarus and Iceland, switch their time on the same night as the UK.

Countries such as France and Spain that are on Greenwich Mean Time (GMT) +1 go back at 3am local time (2am in the UK), meaning the UK always remains an hour behind.

In 2019 the European Parliament voted to scrap daylight saving time and stop changing clocks twice a year. If all European countries agree with the Parliament it could mean that Europe may have a permanent time zone from 2021 or 2022 onwards.

This year New Zealand put its clocks forward on September 27.

This year the US will put its clocks back on Sunday November 1.

Russia has stopped changing the clocks. 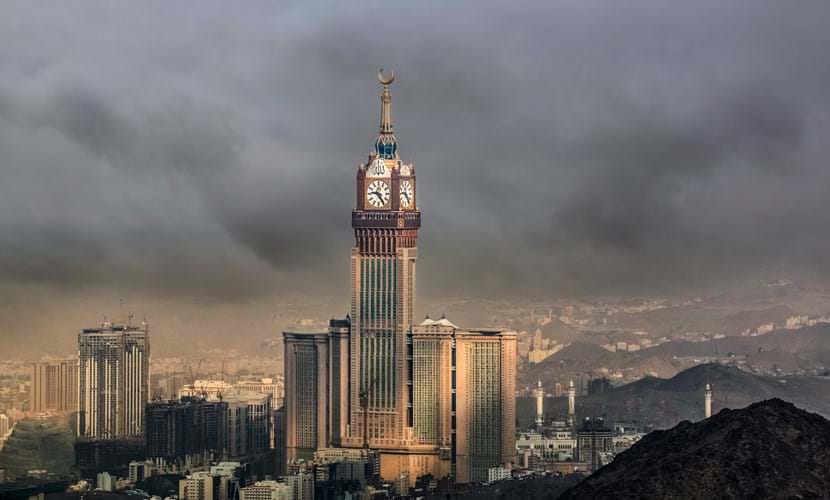 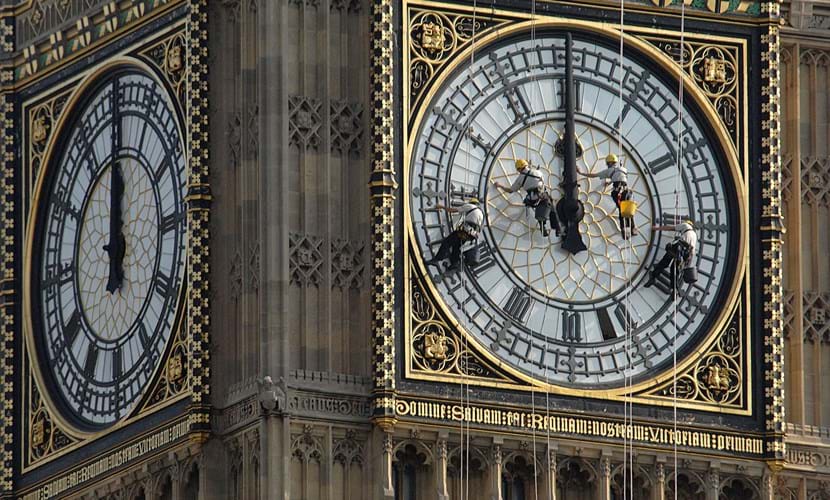 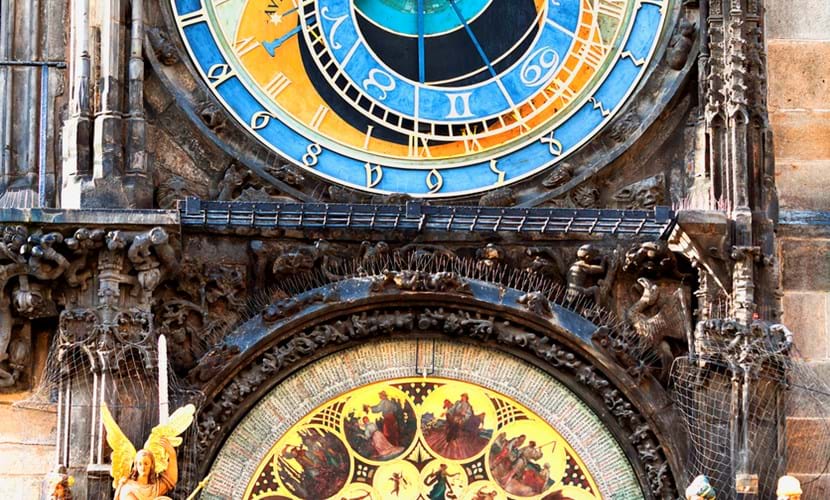 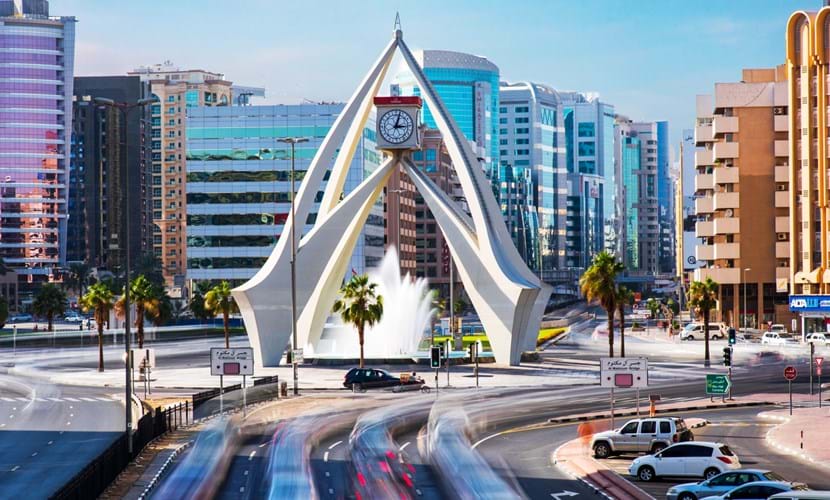 The Rathaus-Glockenspiel on New Town Hall on Marienplatz square in Munich, Germany. 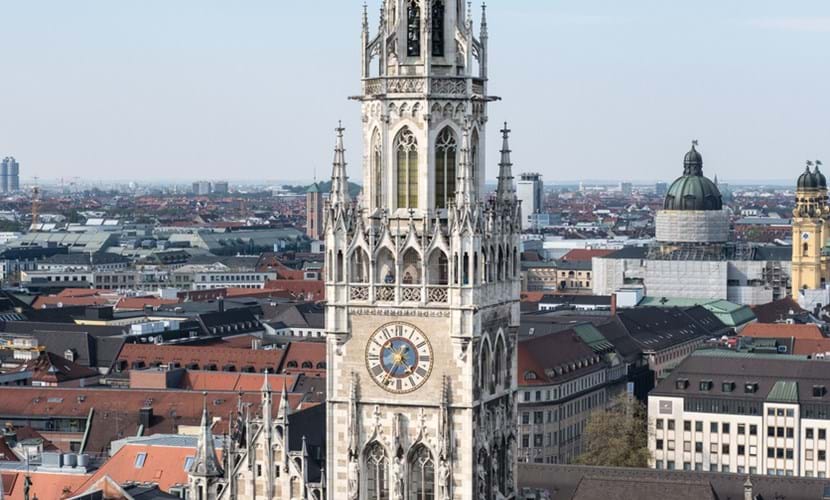 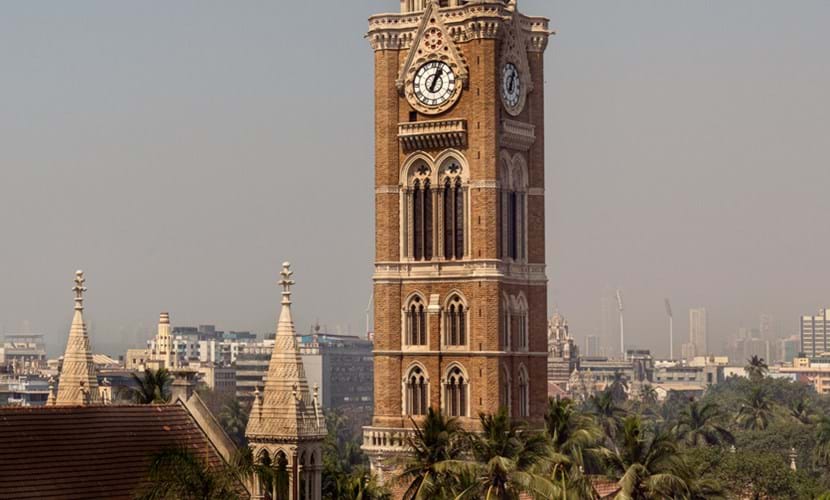 The world's largest cuckoo clock - Titisee-Neustadt in the Black Forest.

Check out this clip on YouTube showing the Titisee-Neustadt clock in the Black Forest - you can see the cuckoo coming out of the clock.

This list below shows the units we use to measure time. It also shows the conversion from one unit to another.