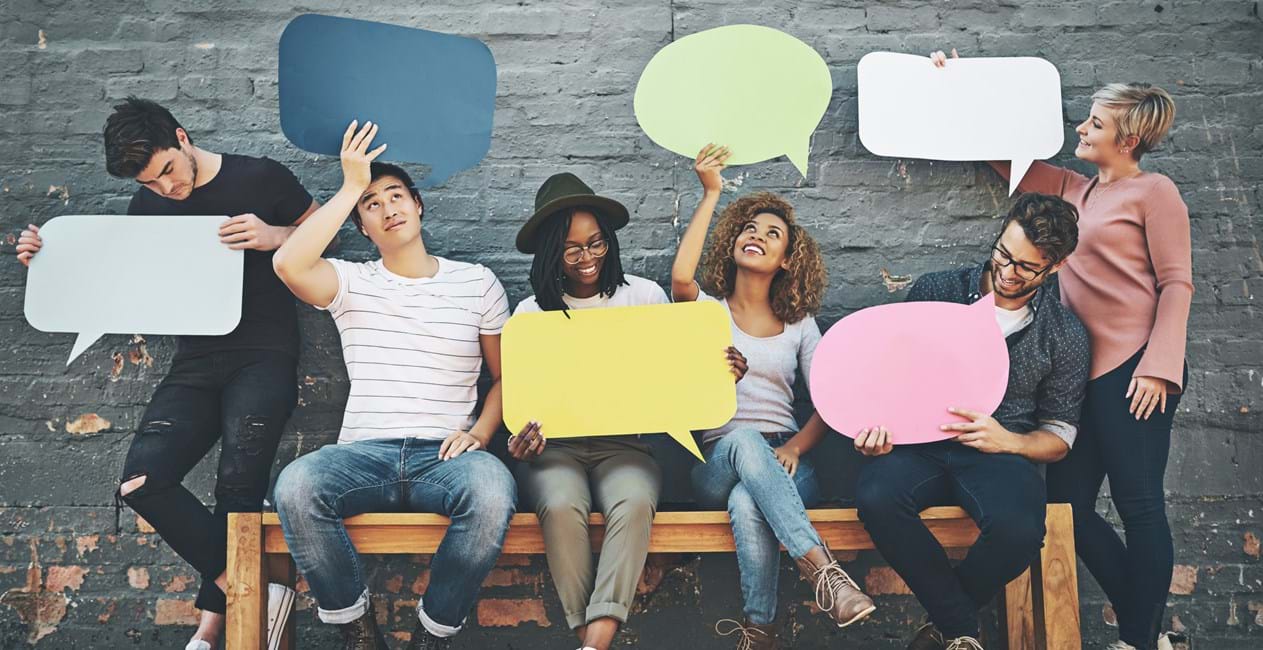 Communication through the ages

Communication is the transmission of a message from one person to another and this can be done in a variety of ways. It is an essential way of sharing our thoughts and helping us understand the world around us. We communicate with other people on a daily basis whether writing an email to a family member, saying thank you to the doctor or playing with a friend.

Communication can also mean how a person transmits messages to many people at the same time. Can you think how one person can give information to more than one other person? It can be through television, on social websites or in newspapers or magazines.

The way we communicate with others has changed over the years. Centuries ago, people used to communicate by sending a smoke signal or a pigeon. Today technology has developed and there are now a variety of ways to communicate including texting, speaking over Zoom and sending an email. Did you know that about 205.6 billion emails are sent every day?

Sign language is also becoming more prominent across the world. Since not everyone can hear or speak, some people use their hands to communicate!! Wow!! This language is coming to the fore in our societies and on our television.

Glossary
Communication
The act of exchanging information through speech, writing or a different medium.
Transfer
To move something from one place to another place.
Social Websites
Websites where the user can share information with others.
Makaton
A combination of using spoken language and hands to communicate.
1
Image & text
Close
Image & text 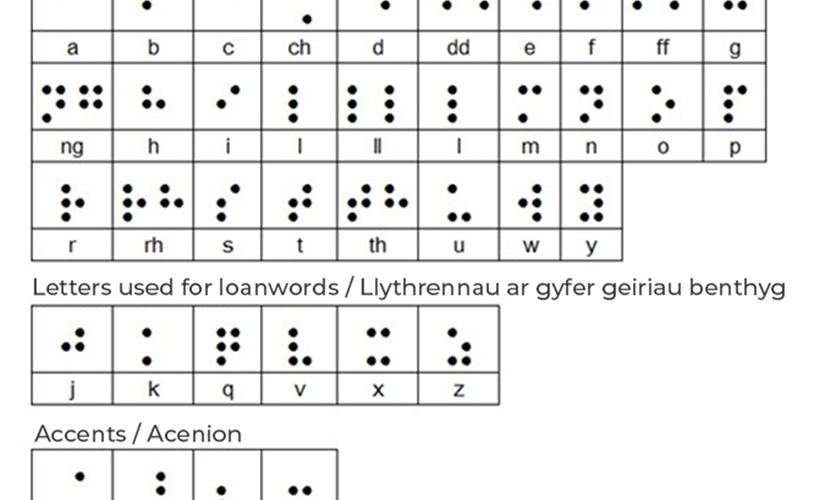 Braille was invented by a young boy named Louis Braille (1809-1852) from Coupvray near Paris. He lost his sight in an accident when he was three years old. He went to his local school but didn't learn much by listening alone. At the age of 10 he won a scholarship to be educated at the Royal Institute for Blind Young People in Paris. There were 14 huge books with raised letters. Louis was desperate for more knowledge.
Then, in 1821, when Louis was 12 years old, a former soldier visited the school and presented his 'night reading' device, comprising a code of 12 raised dots. The purpose of the code was to enable soldiers to share secrets on the battlefield without speaking but it was too difficult for them! Louis was thrilled with the idea and simplified the system to 6 dots. Then in 1829 he published the first book in braille.
He could hardly have imagined that his system of writing and reading by feeling with your fingers would still be in use 200 years later!
It has now been adapted to meet the requirements of all languages from Greek to Zulu. It is also used to show musical, mathematical, chess and scientific notation. 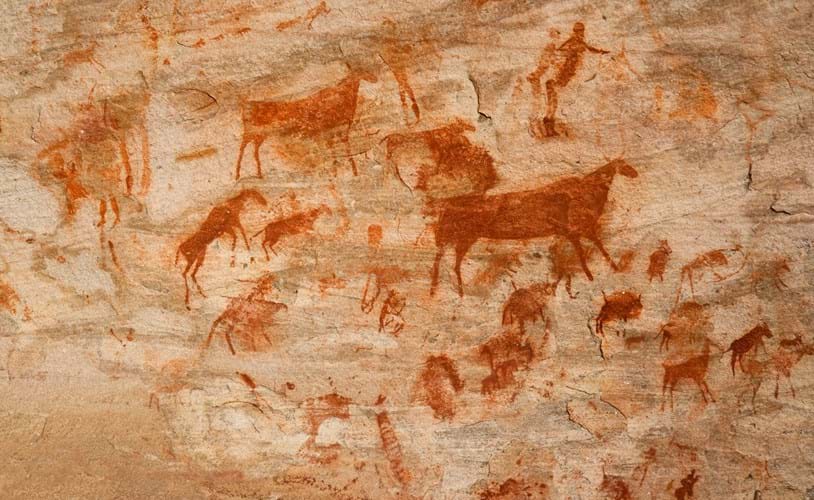 Walking down the street, you often see art on the sides of buildings. Today this art is called graffiti but placing artwork on walls is not a new idea. Thousands upon thousands of years ago this was how people communicated with each other.

Historians believe that the first period of this type of communication dates back about 40,000 years. The oldest art can still be seen to this day on a cave wall in Borneo. In most cases, the pictures on the walls are animals or people but there is also evidence of people leaving their handprints in the caves.

On the Gower, Dr George Nash discovered a piece of art on a stone wall in 2010. Historians believe it is the oldest piece of wall art in Britain and may date back 14,000 years. There have been many discussions about what is depicted on the stone, but experts think that it is a picture of a deer. 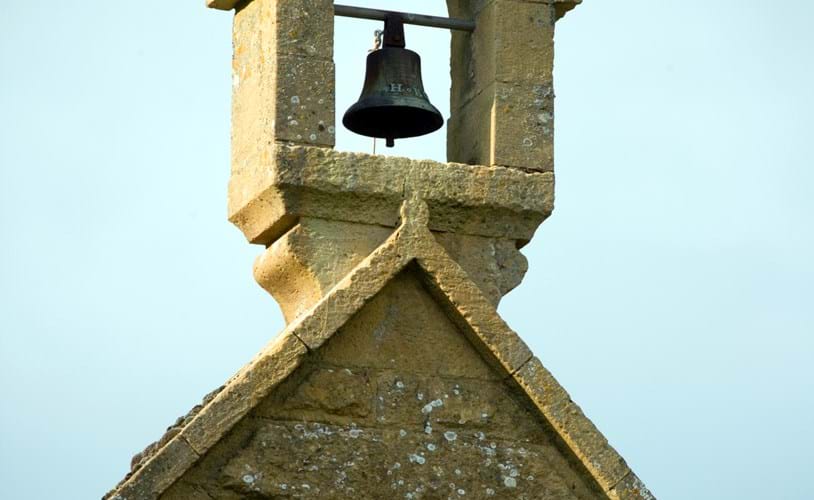 Can you hear the bell?

There is no doubt that the use of language, whether spoken or written or signs, is the most common means of communication. But did you know that some people use bells to communicate?

I'm sure you're all used to hearing bells! What sound do you hear in school? Yes, bells! Schools now have a technological bell but decades ago teachers would ring a bell to let the children know when playtime started and ended.

Bells have also been used in modern communities in Wales. In the early 1960s, Swansea Water Corporation threatened to drown a small village in Carmarthenshire to provide water for Swansea. Residents of the village objected to the plans and some Corporation workers agreed with them. Every time a member of the Corporation left Swansea someone would contact the residents of Llangyndeyrn and they would ring the village church bell to warn the rest of the residents. The villagers would protest and stop anyone from entering the village. 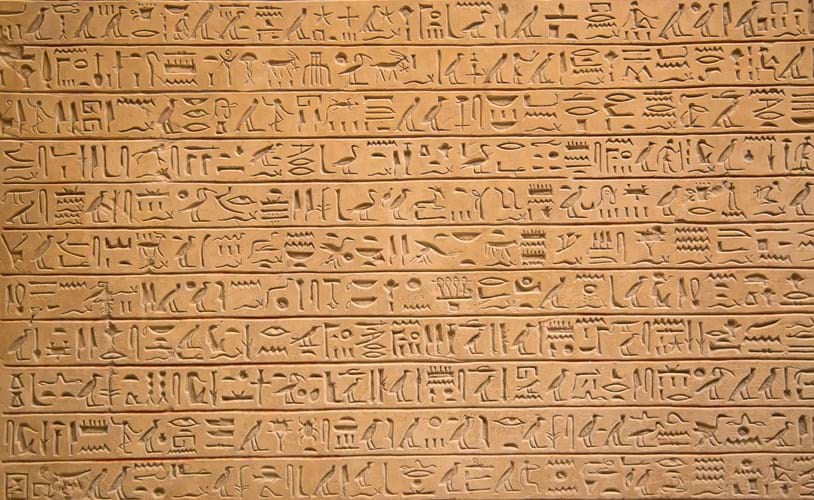 How many times have you heard a teacher complain, 'You must use punctuation! I can't make a head or tail of your work!' But if we used hieroglyphs like the ancient Egyptians, we wouldn't have to worry about punctuation because they didn't punctuate at all! They didn't use vowels either!

What does 'hieroglyph’ mean’?

It’s made up of two Greek words:

How do we know how to read hieroglyphics?

In 1799, a stone was discovered at el-Rashid (Rosetta) in Egypt. On it was writing in two languages – Egyptian and Greek – and three types of script: hieroglyphics which was the script used in important, religious documents, demotic which was the common Egyptian script, and Greek which was the language used by the rulers of Egypt at the time.

How do we know which way to read hieroglyphics?

You have to look carefully at the hieroglyphics to know which way to read them. It depends on which way the people or animals face. If an animal faces to the right then you read from right to left. If it faces to the left you read from left to right – as we do. To complicate things, sometimes they read from top to bottom! 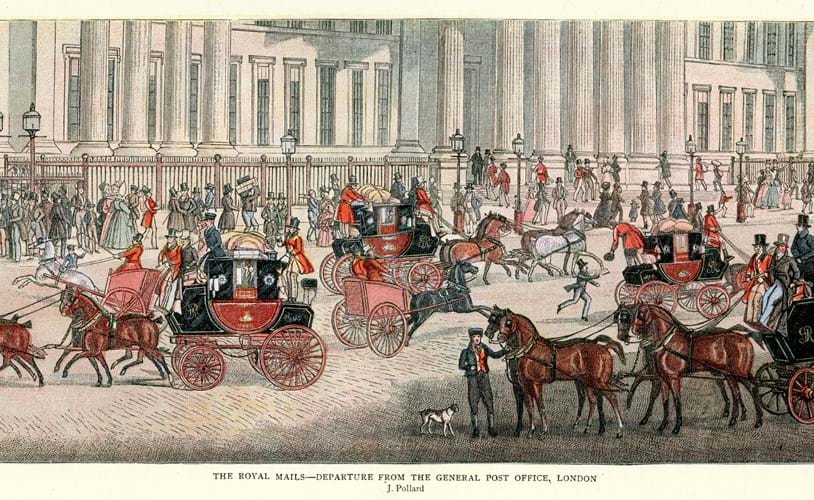 People used to write many more letters a long time ago. Many years ago, messengers would carry letters from place to place. In the 6th century Before Christ, in Persia, they carried messages 100 miles a day by changing horses. In Greece letters were carried by athletes. One athlete named Philonides ran 148 miles in one day!

When the Post Office was created in Britain in 1860, letters and parcels were carried from London to Holyhead by Royal Mail stagecoach.

In the beginning, postmen would carry letters on horseback or on foot. Then came the bike and today the van. But what do we get through the post? Very few personal letters, fewer and fewer postcards from people on holiday and too many letters asking for money or a contribution or advertising.
But will letter-writing end altogether? Will mailboxes only be seen in a museum?

The Urdd has developed a special way for us here in Wales to communicate with the rest of the world. On the 18th of May each year a Message of Peace and Goodwill is sent on behalf of the young people of Wales to young people across the whole world. www.urdd.cymru/en/peace-and-goodwill/

The message was originally the idea of the Reverend Gwilym Davies. He first sent the message in the form of Morse code in 1922, as he was a strong believer in world peace. A Goodwill Message has been sent continuously every year since.

The following is a beautiful poem by the chaired poet Mererid Hopwood:

A Message of Goodwill

Well, this is what one elephant in South Korea has started to do! Koshik, an elephant living at Everland Zoo, has started using words to communicate with humans. The zookeeper, Mr. Kim, explained that Koshik had found how he could talk to the people who work at the zoo. "Because elephants don't have lips like us and because their throats are different to ours, Koshik has had to find a different way to produce the sound" Mr. Kim said. He went on to explain that "he puts his trunk into his mouth and then produces the sound." 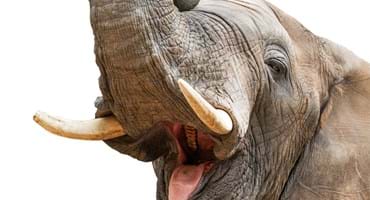 Koshik apparently started "talking" when he was about 14. At the time, he was the only elephant at the zoo and may have produced the words in order to communicate and bond with his keepers.

I wonder whether more special animals will start talking in the future? 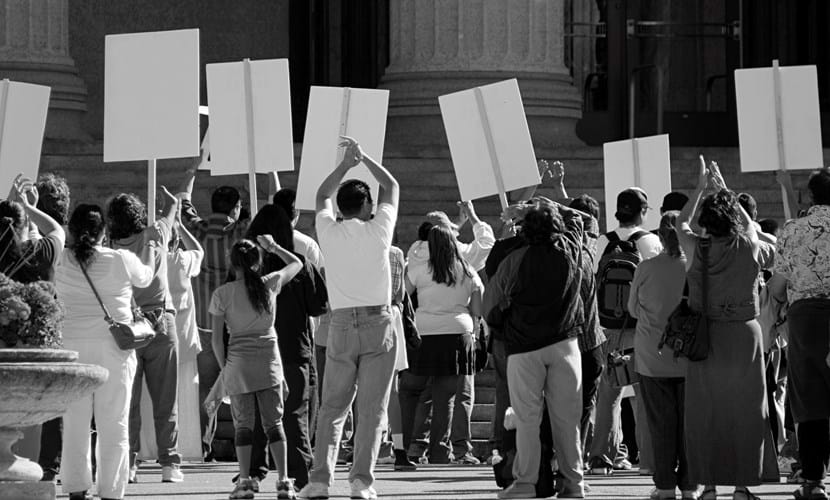 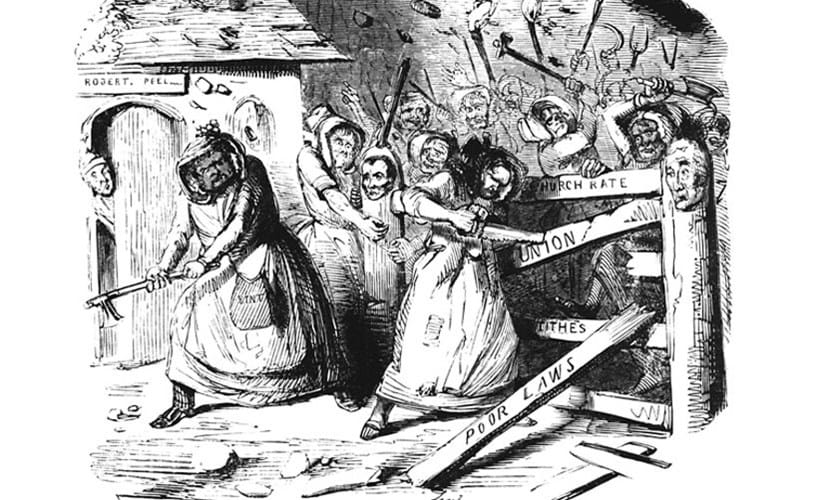 The Daughters of Rebecca were a group of men who disagreed with high taxes in the nineteenth century.  The men decided to protest by dressing as women and protested by attacking toll gates. 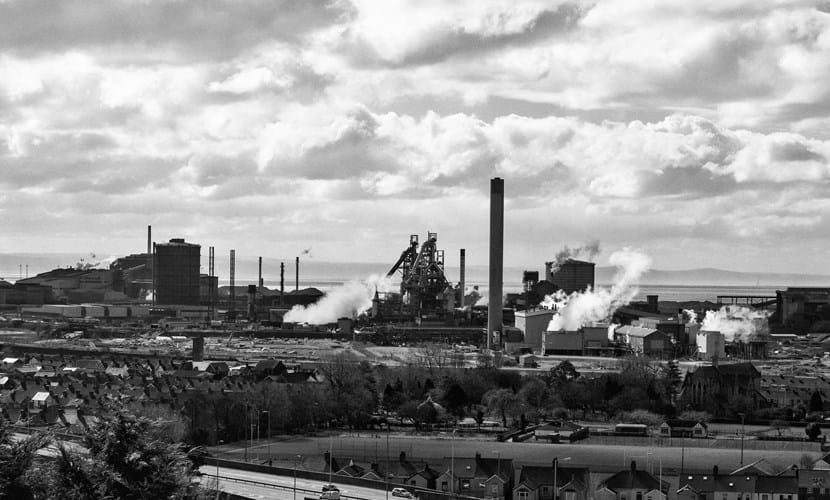 There were also other protests in the nineteenth century. Iron workers were very unhappy because the masters were mean towards them. In 1831 the workers had had enough and protested for four days before soldiers came to help the ironmasters and send the protesters away. 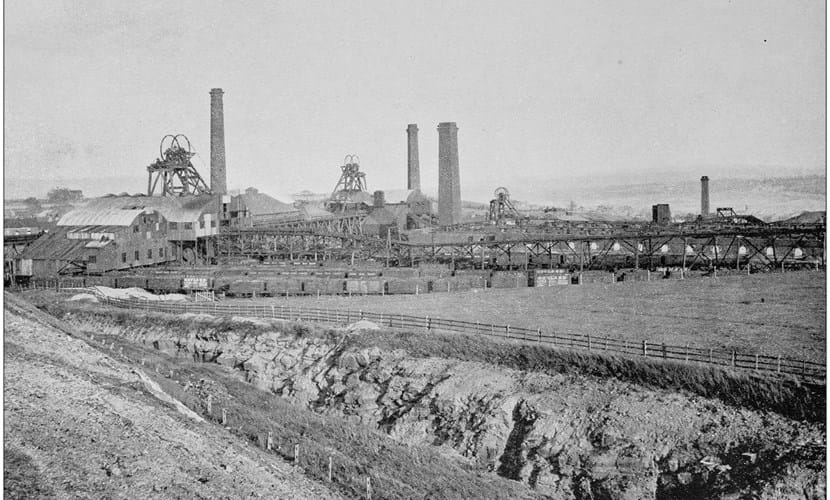 One of the best known strikes in Wales was the Miners' Strike in the 1980s. Arthur Scargill called for a protest because Margaret Thatcher was talking about closing 20 coal mines. The protest lasted almost a year because no one was willing to compromise.