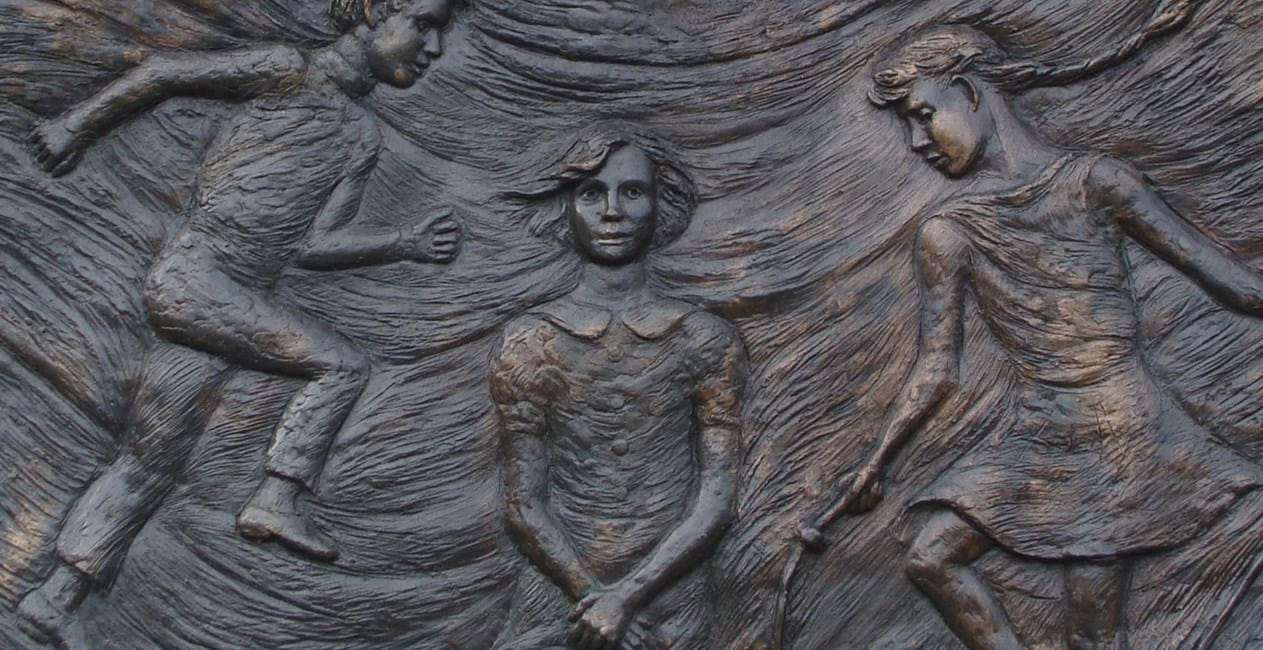 Aberfan is a village in South Wales, about four miles from Merthyr Tydfil. The village, like so many villages in the south Wales valleys, grew as a result of the coal industry.

But on Friday, October 21, 1966, Aberan suffered a disaster. A colliery spoil heap slipped and destroyed houses and homes. 116 children and 28 adults were killed.

Over a period of 50 years, waste from the Merthyr coalfield had been tipped on Merthyr Mountain, and although people tried to warn the authorities that the huge tip was not safe, the warnings were ignored.

After three days of heavy rain, the tip had weakened and began to slip on its disastrous journey down to the village. The children of Pantglas School had been in assembly singing 'All Things Bright and Beautiful'; but as they arrived back in class the lethal mountain slipped and took their lves.

There was a long court case after the incident and the National Coal Board (NCB) was sentenced for its negligence. Compensation of £500 was offered for each dead child.

It is difficult to imagine the impact of the disaster on the village. One report states that the parents of surviving children would not let their children go out to play after the disaster, because the sound of the voices of the children still alive caused too much ‘hiraeth’ for the parents of the dead.

Glossary
Compensation
Something (usually money) awarded to someone in recognition of loss, suffering, or injury.
Disaster
A sudden accident or a natural event that causes great damage or loss of life.
Ignore
Refuse to take notice or disregard something intentionally.
Sentencing
Declaration of punishment to an offender.
1
Image & text
Close
Image & text 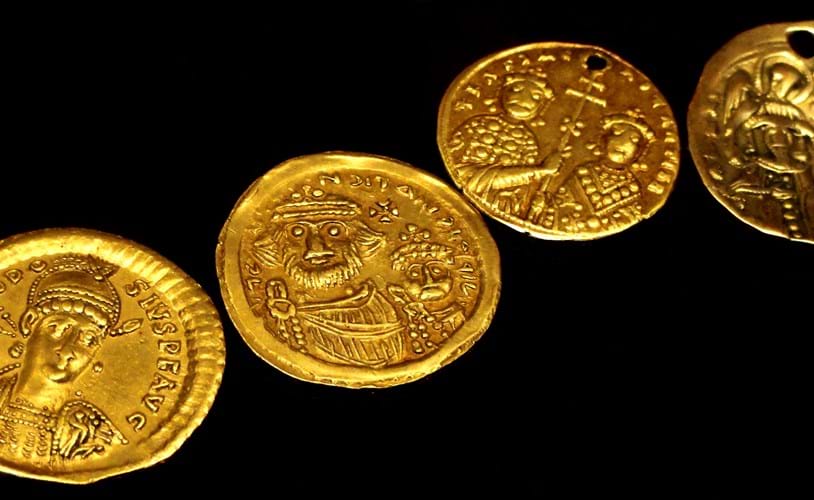 Treasure in the earth

The Romans liked to use gold to make beautiful jewellery and dishes. The Latin word for 'gold' is 'aurum' and the same word is used in Welsh – 'aur'. The letters indicating gold in the periodic table are AU.

Wales has been famous for gold mining over the centuries. Welsh gold is rare and expensive. Some flakes of Welsh gold were sold recently for £44,000! 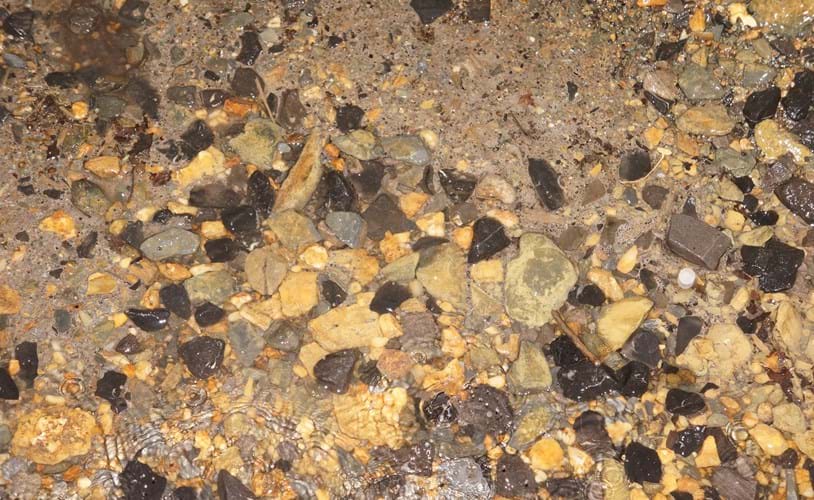 There’s gold in them there hills

Some people think that finding precious metals such as gold in the ground is all about distant countries. But did you know that if you look closely, you can find gold in Wales?

When the Romans came to Wales centuries ago, they found gold, and used the precious metal to make things like jewels, dishes and coins for buying and spending.

The place they found the gold is called Dolau Cothi. A number of valuable coins have been discovered in the area, and no doubt there are more that have not been discovered waiting there for someone to find them. They used sophisticated ways to find the gold. The Romans built a number of large water tanks to help them find the gold. You can still see the back of these tanks beside the River Gwenlais today. They collected the water in the tanks, then released it all to wash over the pebbles, washing away the dirt and mud. They could see any pieces of gold that were left behind.

Another gold-rich area in Wales is around Dolgellau in north Wales. Gold mining began there around the year 1860, a few years after the gold rush in California. Visitors to the gold mine there today have the opportunity to pan for gold.

To do this, you need to use some form of riddle to separate the gold from the stones. 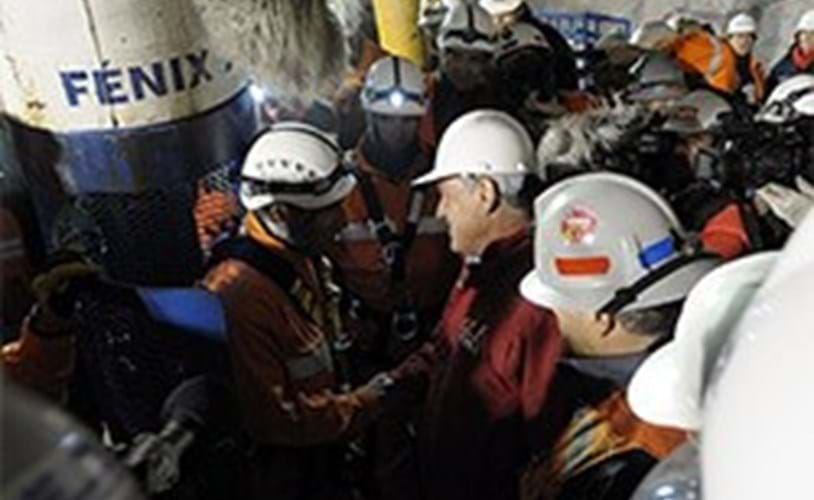 Chile is a country in South America. It is a country rich in minerals, especially copper. The Spanish came to conquer the country in the 16th century and before that the contry was ruled by the Inca.

It is a very diverse country in terms of climate, with areas of hot desert and other areas that are mountainous and cold.

Sebastián Piñera was president when a mining accident occurred in the country. He was present during the miners' rescue period and stayed at Camp Hope with the families waiting to greet all 33 as they wee freed. Camp Hope was the name given to the place where the families slept while waiting for their relatives. There was nothing to do in this place but wait and hope.

Barack Obama, the US president at the time, said that "the unity and determination of the Chilean people are an inspiration to the whole world”. 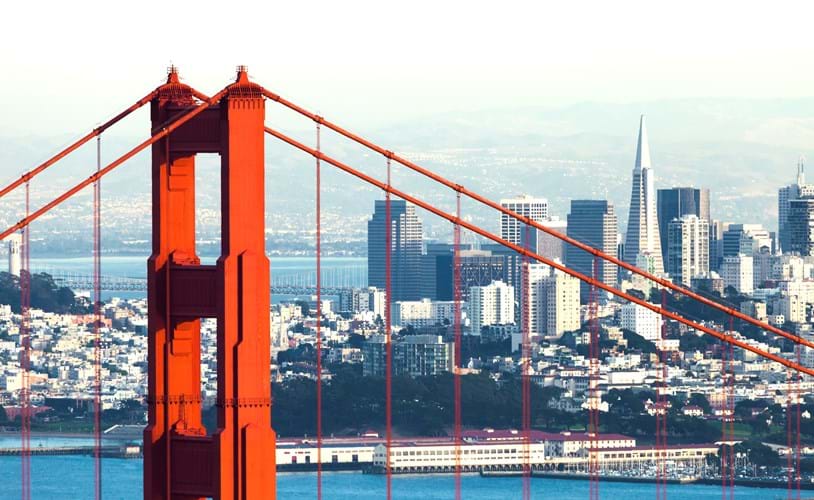 About a century and a half ago California was a quiet place, and not many people had heard of it. That all changed on 24 January 1848 when a man named James W. Marshall found gold there.

The news began to spread across the United States and then across the whole world. Around 300,000 people came in search of gold, trying to get rich.

Some people did become very rich, but others went home without a penny to their name. Before this rush for gold, San Fransisco was just a small village, with few people living there. But today, San Fransisco is one of the largest cities in the United States.

Roads, schools, hospitals and homes began to be built across California, and it was a very exciting and busy time. The system initially used was panning, which means using some kind of small pan in a river to separate the gold from the pebbles. As it became clear that there was a lot of gold there, the ways of digging for gold became more sophisticated, and heavy engineering was used.

But as with all developments of this kind, there were both winners and losers. Native Americans whose families had lived there for centuries were forced out.

Their lands were stolen so that white people could get the gold.

It's been two months since I last saw Dad, and hopefully tomorrow I'll see him again. For 33 days teams have been working hard, drilling a hole in the ground in a bid to save Dad and the other 32 men there. They have drilled a long shaft that is 66cm in diameter and extends 700m underground to the men. The intention is to drop a special cage down the shaft. The cage is large enough to hold one man, so Dad and the rest of the workers will be lifted from the ground one by one.

We've been camping at Camp Hope for a week. Although there is a cloud hanging over us, everyone tries to keep each other in good spirits. I have to get a good night's sleep tonight, tomorrow is a big day and I will need all my energy.

Dad came out of the mine at 2.14 yesterday afternoon. Although he was wearing a pair of sunglasses, there was no doubt that it was Dad. His clothes were full of dirt and dust and his hair looked grey because of that. He had lost weight but given that he had been underground for sixty-nine days, he looked fine. I've never been so pleased to see someone. The mixture of excitement and fear that had lived in my stomach for days exploded in one stream of relief. There were tears of joy flowing down my mam's cheeks. I felt as if I had something stuck in my mouth – I couldn't stop smiling.

All of the miners were rescued safely. We are all looking forward to Christmas and putting this experience behind us.

Welsh Slate is the world’s leading supplier of high-quality slate for a range of exterior and interior design applications. Uniquely 500 million years old, the material is widely recognised as the finest natural slate in the world.

Welsh slate has been used and crafted by many generations of people from all walks of life from the Iron Age to present day. 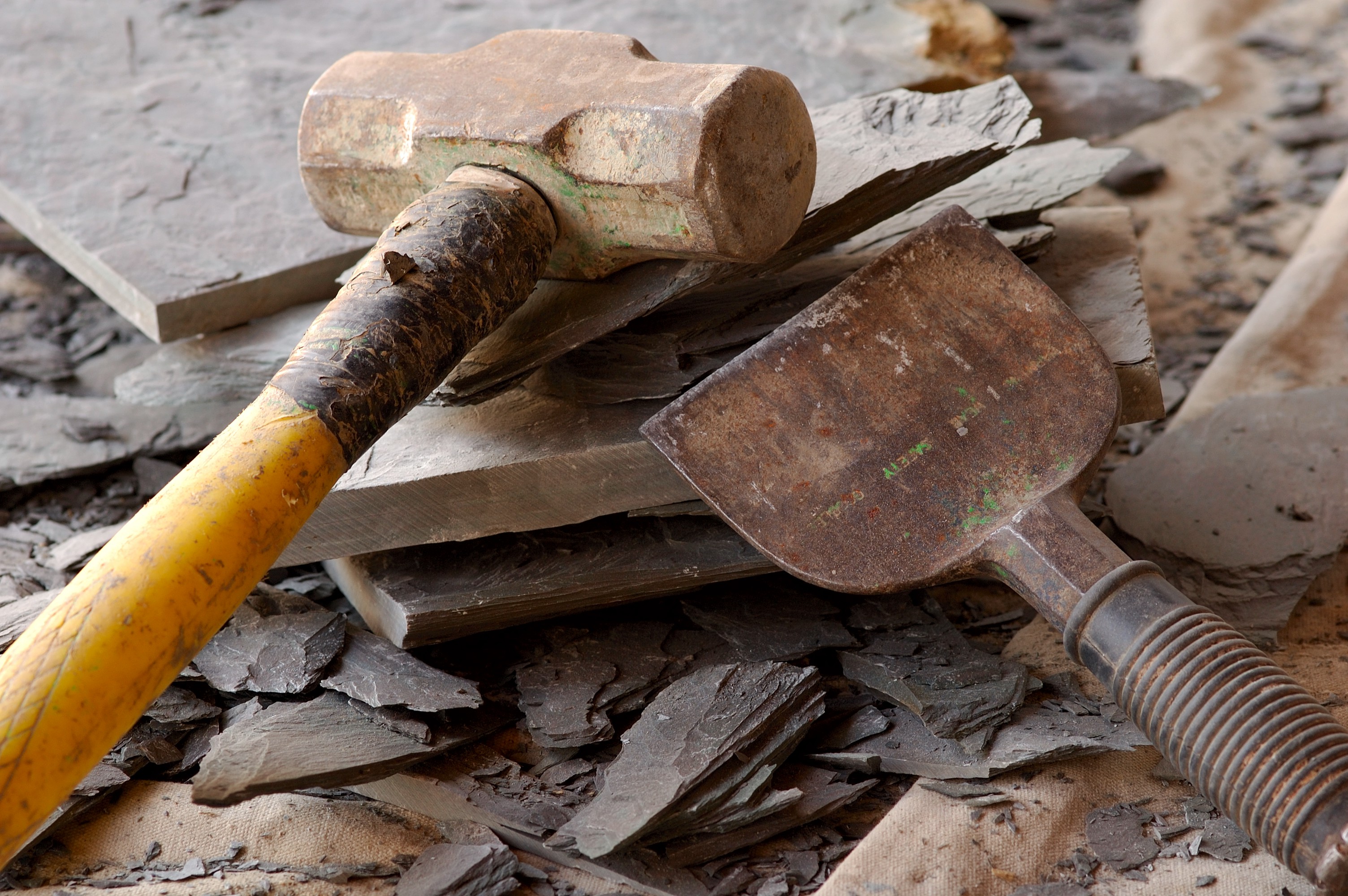 As Vice-Captain of Caernarfon county and councillor for Llandygai, I beg your kindness to seriously consider the working conditions and wages of your employees. The situation is serious as we are living in poverty while you sit in the middle of your personal wealth. We feel strongly in favour of union representation to fight our cause just like the quarrymen of Ffestiniog. This is what will lead to a fair deal for everyone.

You must also consider the social impact this strike is having. Twenty-six workers have lost their jobs following the attacks on contractors who worked Ponc Ffridd Banc and are waiting for a court case. The situation is appalling and there must be an agreement that pleases you as owner and ourselves as workers. A quarry is worth nothing without quarrymen.

We very much hope that you will consider our situation.

The Great Strike at the Penrhyn Quarry, 1900-03, was one of the largest disputes in the industrial history of Britain. Although there had been strikes before at the quarry, there had never been one on such a large scale. The local society would be changed forever.

At the end of the 19th century, Penrhyn Quarry was the world’s largest slate quarry and worked by nearly 3000 quarrymen. The quarry has been superseded in size by slate quarries in China and Spain due to mining and labour costs. Penrhyn is still the largest slate quarry in Britain with a workforce of approximately 200.

The quarry was owned by Lord Penrhyn. Tensions were high at the quarry over minimum payments to quarrymen which resulted in an 11-month dispute from 1896 to 1897. Lord Penrhyn had been trying to eliminate the North Wales Quarrymen’s Union’s influence within the quarry. 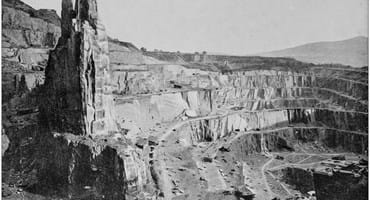 In April 1900, quarry manager Emilieus Young announced trade union contributions would not be collected at the quarry. The announcement led to ill feeling between quarrymen and contractors who had struck a ‘bargain’. The ‘bargain’ was a practice of offering a deal to work a section of the quarry based on the quantity of slates produced for a set price. A number of quarrymen were suspended based on their behaviour without a fair hearing in the Magistrates Court.

On the 22 November 1900 the quarrymen refused to work and walked out, marking the beginning of the Great Strike. However, some quarrymen were enticed back to work receiving a sovereign each and a promise of a 5% wage increase. This led to trouble in the area as the strike loyalty had been broken. The community would be never the same again. By 1902, 700 men had returned to work due to and poverty. 2000 quarrymen moved from the area to find alternative work. In November 1903 the rest of the quarrymen went back to work with their union still not recognised!

I hear a voice in the valley so steep
And that voice
Is the voice of rain
Beginning to weep.

I see a hand in the valley so steep
And that hand
Is the mountain’s
Awakened from sleep.

I see one colour in the valley so steep
And that colour
Is grey
Ready to reap.

I hear a question in the valley so steep
And that question
Is why?
And it’s far too deep.