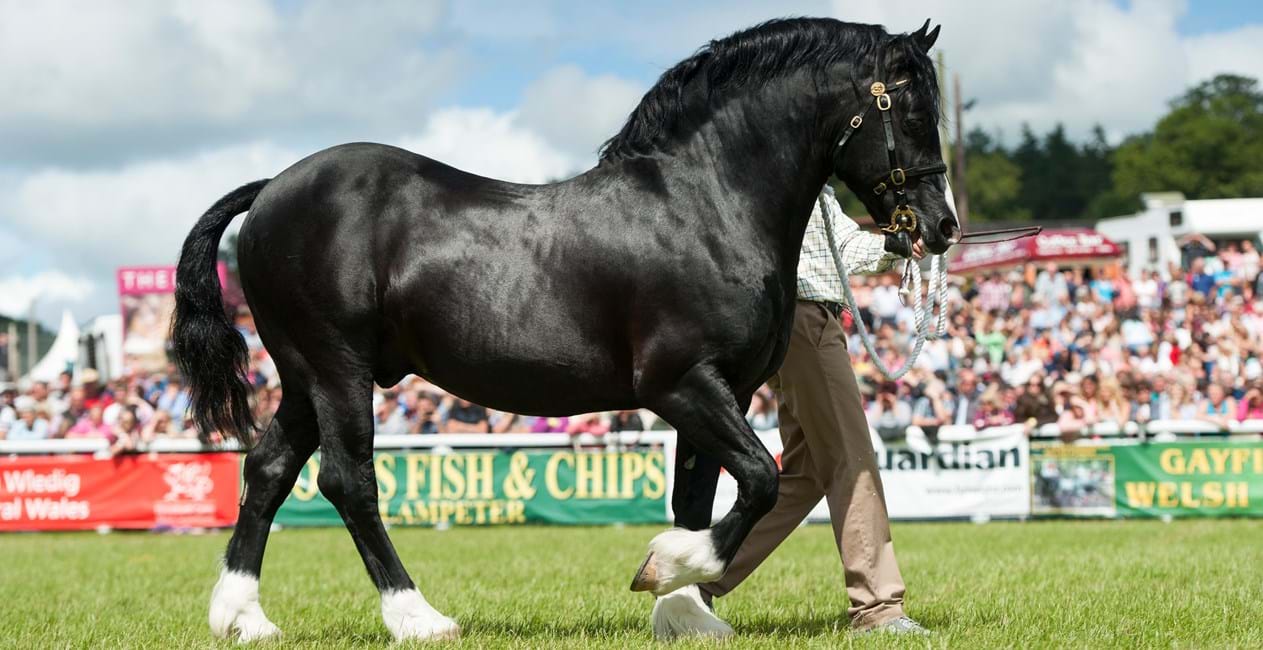 A celebration of Welsh livestock, produce and crafts.

The first show was held in Aberystwyth and attracted 442 livestock entries. Four years later, in 1908, 23 special trains with 224 cattle trucks and horseboxes arrived at Aberystwyth. 100 train coaches were also required to ferry the visitors from far and wide to the show. It was seen as a celebration of livestock in Wales where the best animals were on show to the public.

Today, the society is a national institution loved throughout Wales and beyond, not only by farmers and the rural community but by people from all walks of life, many of whom have come to regard the Royal Welsh Show as the highlight of their year. To many it is their annual and main holiday of the year!

The show is a platform to showcase a range of Welsh livestock and high quality food, drink and crafts produced in Wales.

Every year over 240,000 people visit the showground and approximately 8,000 animals compete over the four days to be the best of the best.

The show provides something to interest everyone through its range of activities including:

The event is enjoyed by the thousands of competitors, exhibitors and visitors who attend year on year.

It is also becoming an important place to conduct business, discuss politics and is attended by influential and powerful individuals, companies and organisations.

A fantastic experience and a worth while visit.

Glossary
Approximately
Something that is almost, but not completely accurate or exact.
Evolution
The gradual development of something.
Influential
Having great influence on someone or something
1
Image & text
Close
Image & text 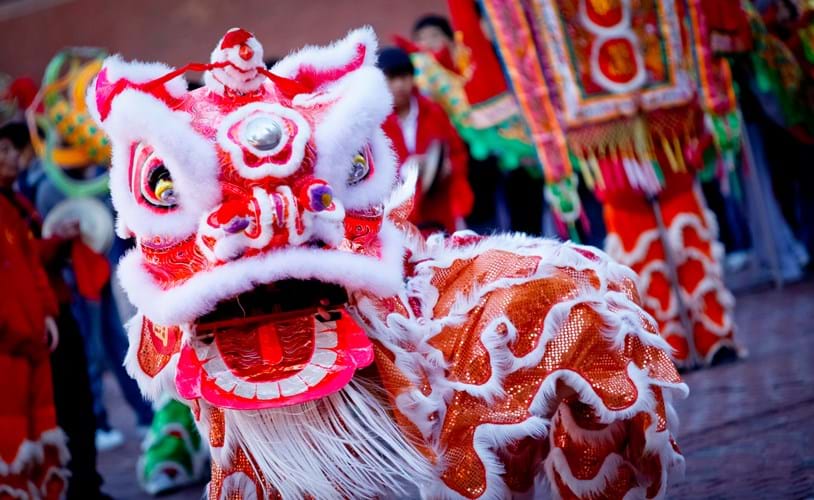 The new year is the longest and most important celebration in China. In China, it is not 2020 this year, but 4718, starting on January 25th. People take a week's holiday to prepare for the celebrations.

Blowing fire into the new year

According to legend, Buddha asked the animals to come and meet him on the first day of the year. Twelve animals came and he named a year after each. He said people would get some of the characteristics of the animal whose year they were born in.

The first day of the Chinese year changes from year to year:

At the celebrations Chinese people wear red clothes decorated with poetry on red paper and the children are given 'lucky money' in red envelopes called hong bao. Red is a symbol of fire and they say it can protect you from bad luck. That is the reason for the firework displays overhead. In the past Chinese people would ignite bamboo stems, believing that the crackling noise would frighten evil spirits! 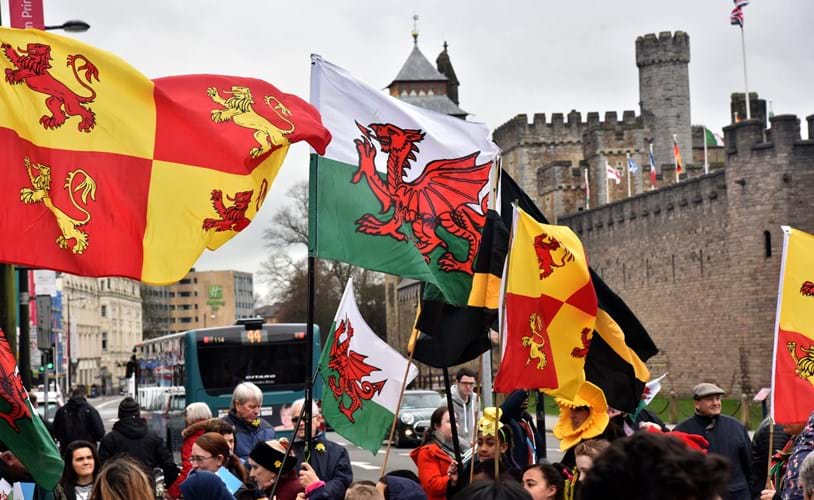 Saint David is the patron saint of Wales. We celebrate his life on 1st March each year, St David's Day.

No one is quite sure when Saint David was born. People say he was born in the sixth century. According to the story, his father’s name was Sandde and his mother’s name was Non. Sandde was Prince of Powys.

He was born near Capel Non, not far from St David's, Pembrokeshire. He received his education in a monastery in Henfynyw from a blind monk called Paulinius.

David could perform miracles. His first miracle was probably to restore the sight of his teacher, Paulinius.

He travelled a great deal to Ireland, Cornwall and Brittany to tell people about Jesus Christ. He also went on a pilgrimage to Jerusalem to follow in Jesus’ footsteps.

One day while he was preaching in Llanddewibrefi people complained that they could not see him. Saint David reportedly placed a handkerchief on the floor before standing on it, and suddenly, a small hill rose under his feet so that everyone could see him!

Saint David lived a simple life, as did Jesus. David’s last words before his death were... 'Lords, brothers and sisters, be joyful and keep your faith and belief, and do the little things you saw and heard from me'.

David was famous for doing little things that made a big difference to someone else e.g. doing favours, being kind and helping.

Today people have many different ways of celebrating St David's Day. Many children wear Welsh costume, others wear daffodils or leeks. It is traditional to eat leek soup and many towns organise various events and parade around the town to celebrate the occasion. 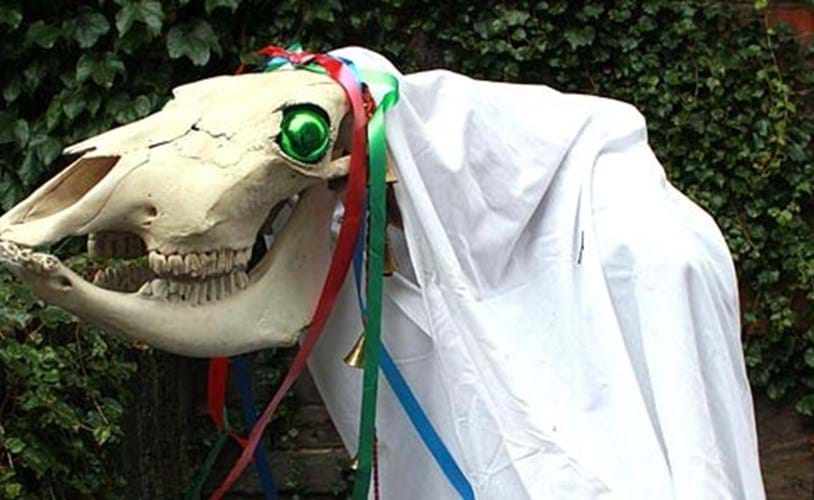 The Mari Lwyd was a horse’s skull covered with sheets and decorated with ribbons. The skull was placed on a pole so that the person under the sheet could open and close the mouth.

As part of new year's celebrations, a group of men would take the Mari around the area and call in every house or pub. They would sing cheerful verses asking for an invitation to come in. The homeowner would reply. It was very bad luck to refuse entry to the Mari Lwyd. Inside the house, the group would have fun and be given food and drink.

The horse's skull was carefully prepared. It would be buried in lime for three months and then scoured clean. After that, it would be dressed and decorated.

In the past young children used to go from house to house on the first morning of the new year collecting money or gifts known in Welsh as calennig. This had to be done before noon and they would sing this verse:

If they didn’t get some calennig, they would sing:

(An unhappy New Year,
A house full of smoke!)

In some parts of Wales, some children still collect calennig on the morning of New Year's Day.

People used to believe in the following:

I don't think I can sleep at all tonight. What about you? The events of the day, well – all the last few weeks – are going around my head like a merry-go-round. I don't really know how I feel. I had been looking forward to today for so long, but what did I do? Cry! Yeah, I cried!

Leaving Rhosforgan Primary School was sad. After all, I've been there most of my life and enjoyed it. I'll have to grow up now and I can't do some of the things I enjoyed for so long. Secondary school pupils aren’t supposed to play hide-and-seek or touch!

I made some clay models when I was in reception class and I've kept them. It's hard to believe they're supposed to be a cat and a dog, but they're treasures to me.

I'll treasure the books I got today from teachers in school too. All signed with kind words: All good wishes to you at Ysgol y Ddraig, Mrs Williams; Remember the fun in Class 4! Mr Frank Hughes; Onward and upward! Lowri Gwyn.

Yes, we had fun with Mr Frank Hughes. Do you remember hearing me talk about him? Frankenstein they call him! One April Fool’s Day, he said he’d seen a sheep with six legs! And typical Dafydd from Fferm y Waun, he asked where the sheep was so his father could ask the farmer where he’d got it from. 'Six legs of lamb instead of four pays well!' he said. Ha ha!

What did you do today? It's nice to have a cousin the same age as me at a different school. I feel better after writing this email. Please answer to say how your last day in primary school went.....

Hello friends, it's my birthday today. I’ll be getting presents from family and friends and a birthday cake with candles. What do you get in your country?

Hiya Sofia, happy birthday to you. I'm from Vietnam. Everyone's birthday is celebrated on the first day of the year. We call the day Tet.

Very interesting Binh. I live in Canada. In areas like Nova Scotia, Prince Edward Island, New Brunswick and Newfoundland the person whose birthday it is gets their nosed greased for good luck. Greasing your nose makes it too slippery for bad luck to get hold of it. Happy birthday Sofia!

I live in Denmark. It's like Christmas here on your birthday because your presents are put at the foot of your bed while you sleep. We wave a flag outside the house to show someone there is having their birthday. Enjoy your birthday Sofia!

Happy birthday Sofia! It is interesting to read about different traditions. When I was little I was put in a chair and picked up the right number of times to go with my age. This also happens in Latvia and Lithuania. I live in Tel Aviv.

Hiya Sofia, I hope you have an excellent day! In Mexico we smash piñatas. The piñata is made of papier mâché in the shape of an animal and is filled with goodies. The person whose birthday it is wears a mask and hits the piñata until it cracks open. Everyone shares the treats.

Thank you for your birthday greetings. I'm looking forward to coming home from school to open my presents!

The St David Awards are the national awards of Wales and are chosen by the public. There are 9 St David Awards, to include bravery, community spirit, culture and sport, business innovation and technology, young person and humanitarian. A new category has been added to the 2021 awards based on Critical Worker or Key Worker.

The awards are looking for an individual, team or group in Wales who have made an outstanding contribution to the fight against coronavirus and have gone that extra mile to support the people of Wales during the coronavirus pandemic.

Is November too early to decorate for Christmas?

Is November too early to put up the Christmas tree? Not for one family who have had their house trimmed and decorated for Christmas since early November

"It's never too early to decorate and put up a Christmas tree!" says Heledd Roberts who lives with her husband Rhodri and their children Rhys and Siân.

"I usually put them up from around the beginning of November. I start decorating the garden outside the house before putting three Christmas trees downstairs in the house as well as one in the children’s bedrooms. They love it!"

Heledd admits not all her friends understand why the whole Christmas display needs to be put up so early.

Guto who lives next door said. "Helen is a bit of a character. I'm looking forward to seeing what new things she has this year lighting up the garden. People come from far away to see the display. It's usually a bit of a show and all for a good cause." 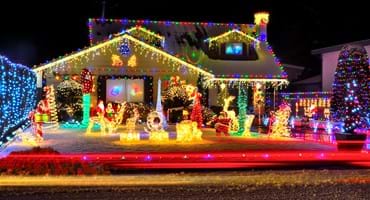 Heledd said "Some people laugh at me and say I'm mad, and my husband always says that it's far too early to put up the lights and tries to persuade me not to.”

"Every year our collection has grown and grown. Every room gets decorated including the toilet!"

Queen Victoria popularised the Christmas tree in Britain after her husband, Albert, brought the German tradition, which was originally based on Pagan practices.

It is said traditionally that Christmas decorations need to be taken down by the Feast of the Epiphany, which is the 6th of January. The Church in the west adopted the 6th of January as the date the Wise Men came to see the baby Jesus and the end of the Christmas festival. 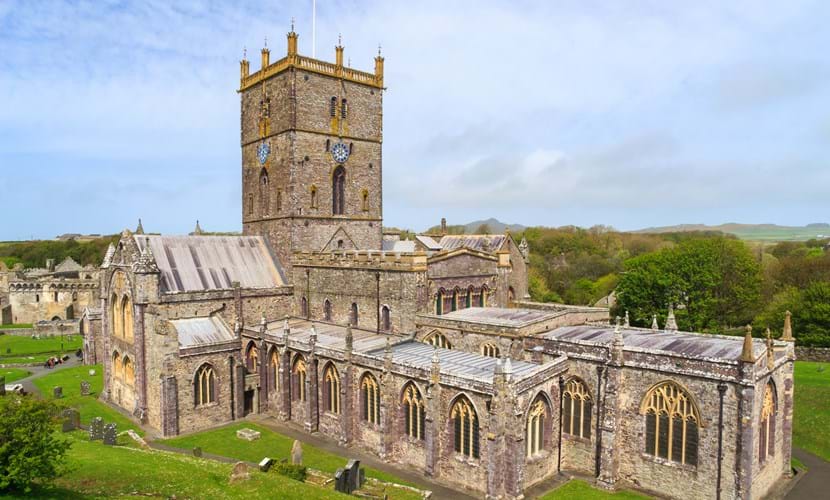 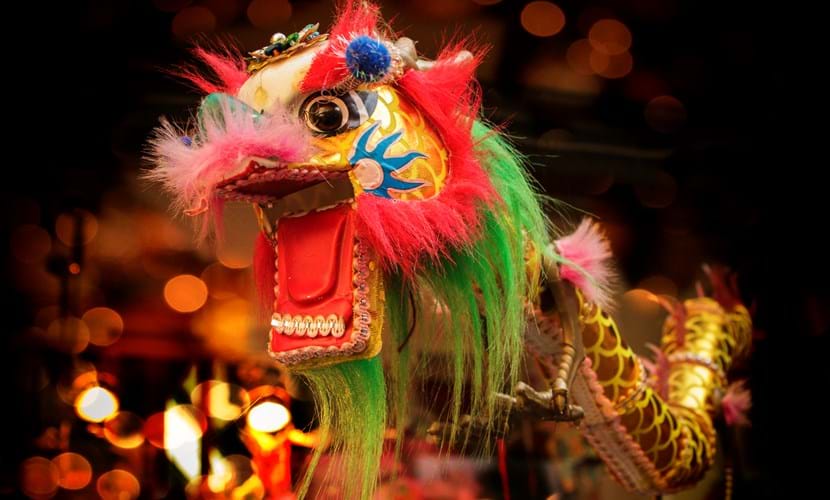 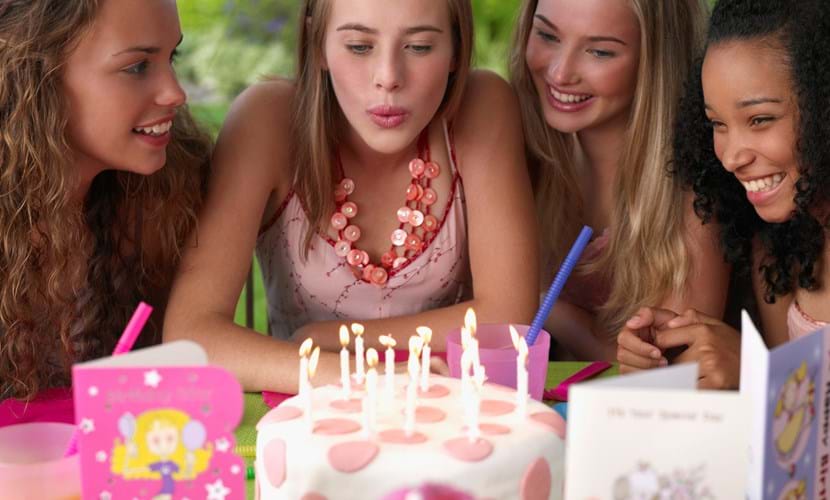 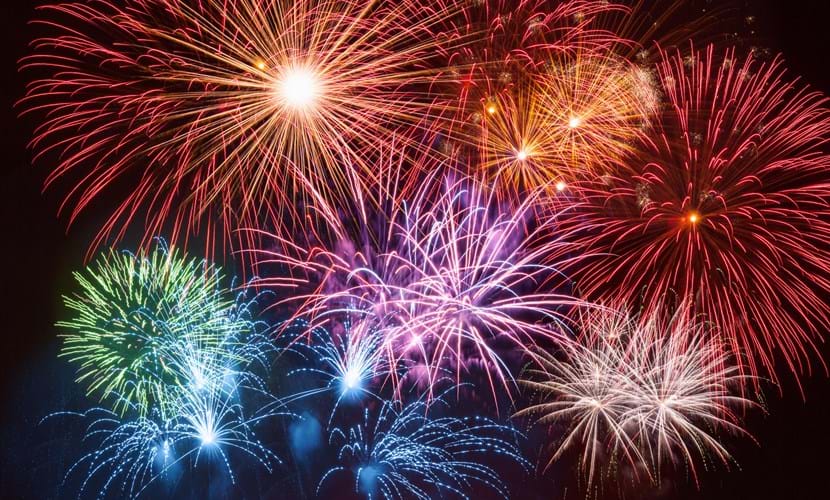 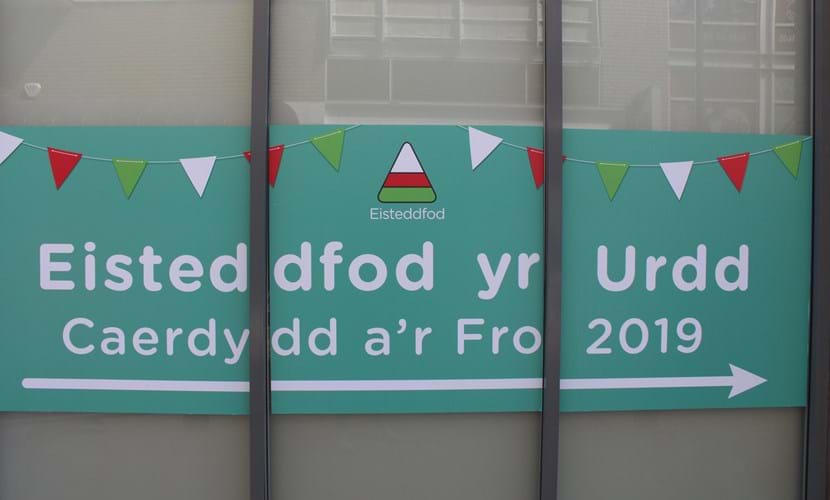 The Legend of Gwyn ap Nudd

Halloween is celebrated around the world. According to Welsh mythology Gwyn ap Nudd, King of the fairies in the underworld known as Annwn, walks the land on Halloween night.

Watch and listen as poet Gwilym Morus-Baird tells some of the story.

Drag and drop the correct facts linked to the Welsh hero.